When watching a movie based in a fantasy-oriented setting, one tries to make a point to take note of certain rules that the premise sets up. Fantasy-oriented films have a trade-off – while they don’t have to abide by standard logic in terms of what can conceivably happen, we expect them to set up their own internal logic and stick to it. 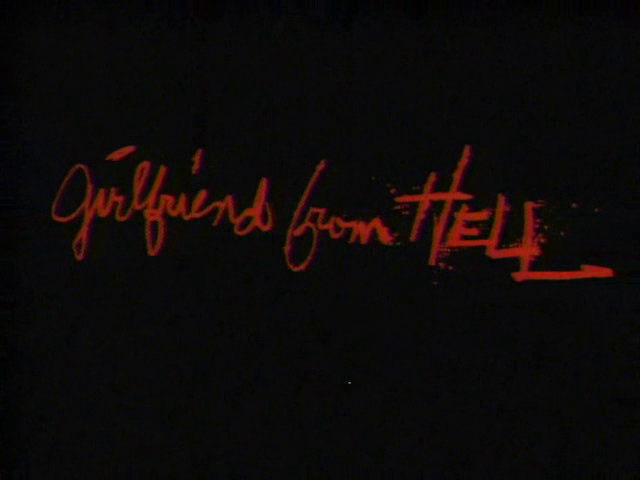 So while watching, oh, let’s say GIRLFRIEND FROM HELL, you may find yourself asking questions in an effort to understand the mythology. “Why is Satan just wandering around from body to body?” for example, or “Why the heck would God entrust the killing of Satan to some basically random guy? What does Satan want, anyway? How does the transportation device work and how does a random human woman know instantly how to use it perfectly? What the hell is going on?”

Do not ask these questions. GIRLFRIEND FROM HELL is not the type of film that will give you answers. 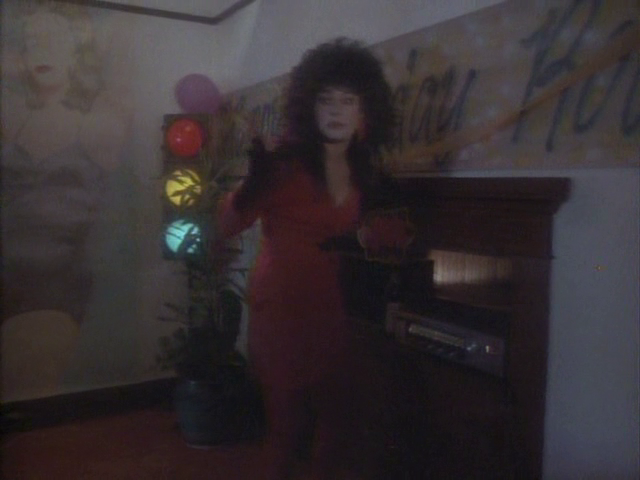 No, GIRLFRIEND FROM HELL is the type of film that sets up a mythology for the sake of a few jokes and then doesn’t give a shit about it. And y’know what? That’s just fine, provided the jokes are okay. Just… don’t try to think about anything happening in the film or more than the instant in which it’s happening, and try not to have any expectations as to what will happen in the next instant, or what turns the plot will take. You’ll be a lot happier and less frustrated. (This also works in life.)

GIRLFRIEND FROM HELL stars Liane Curtis, the charismatic star of CRITTERS 2 (and ROCK’N’ROLL HIGH SCHOOL FOREVER, but we won’t hold that against her), as Maggie, a young woman whose flower is so walled that she bursts into tears when putting on clothes. She’s set up on a blind date by her friend Diane (FREDDY’S DEAD’s Lezlie Deane) and her boyfriend David (James Daughton, whose role in ANIMAL HOUSE is referenced) with Carl (FRIDAY THE 13th PART V’s Anthony Barrile), an equally awkward young man who lives with parents, played by James Karen and Alba Francesca in an inspired cameo in which Karen tells him to put his tongue into girls’ ears in order to gain their love. 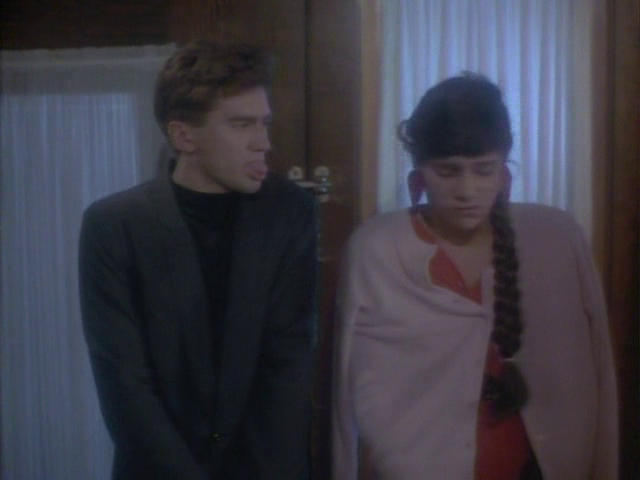 The foursome meets up together at a friend’s birthday party, where the bickering hosts fight about balloons and Maggie struggles with her gloves. It’s entertainingly awkward, as Carl attempts his father’s advice and both of the would-be couple keep throwing up, but then things start shifting into high gear after Maggie wanders outside and is struck by a beam of red light in the shape of a pentagram and becomes… THE GIRLFRIEND FROM HELL.

The beam has been tracked down by a gangly fellow named Chaser, played by “Twin Peaks” vet Dana Ashbrook, but the newly possessed Maggie/Satan quickly knocks him out before he can warn the group. She then uses her Satan powers to change her look, becoming a high-haired, cleavage-showing sexpot, dragging Carl along with her as she drives the gang to a restaurant to meet a pair of additional friends, swerving and cackling the whole way there, even when they’re attacked by heavily armed vigilante nuns. 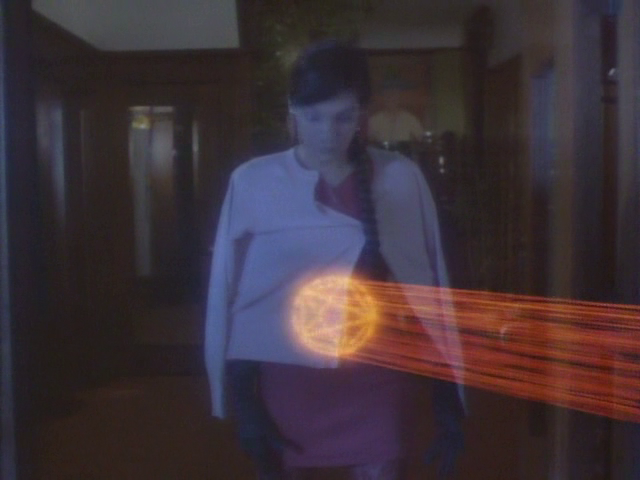 (The gun-toting nuns have nothing to do with the plot, mind you, and they have no idea they’re shooting at Satan – the filmmakers just wanted to make a joke about gun-toting nuns. I said stop asking questions.)

Dinner is awkward for everybody except Maggie/Satan, who comes off like an extra-bitchy, drunken Elvira, and Carl, who loves every second of it, especially after she makes a lobster come to life and attack another customer in order to get a table. New bible-thumping couple Freda and Teddy are scandalized, especially after Maggie rants about God’s lack of style and showmanship, and Maggie ends up storming out with Carl in tow, gleefully causing havoc to every passer-by in the background, and taking control of Carl when they’re confronted by a gang. 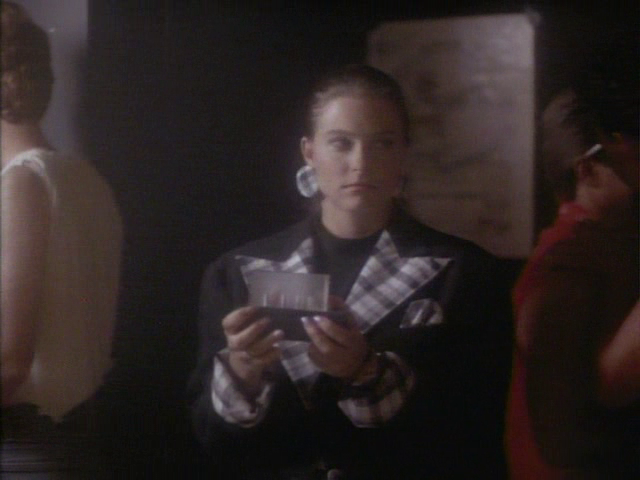 The whole group eventually makes their way back to the party house, which is good, because that’s where Chaser ‘s been hanging out. It’s too late for Carl, though – Maggie sucks up his soul via some clothed sexy times, a fate that ends up befalling most of the male cast as she starts seducing and soul-stealing her way through the party. (“I suppose I should go hunt them down one by one and kill them,” Maggie deadpans with a sigh.)

By the time she releases Chaser from the closet in which she’d locked him, most of the cast has been dispatched in one way or another, and soon it’s up to him and Diane to save the day. The problem is that Chaser keeps hitting on Diane, and he also explains that he and Satan used to date, and things are really awkward. 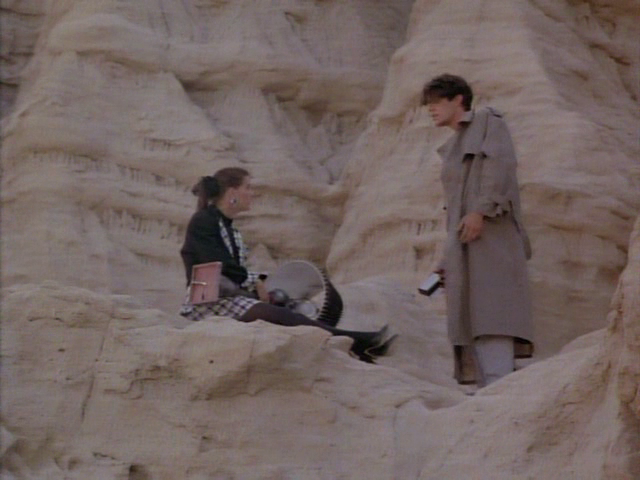 Chaser explains his back story – he was a drunken womanizer that died and was deemed too bad for Heaven, but was sent back to Earth in order to get his reputation up as a second chance because he invented the condom(!). Unfortunately, he ended up sexing the devil and then tried to kill her, and they’ve been playing cat and mouse ever since. The film then follows Chaser and Diane teleporting all over the place (including a strip club and a gay bar) when Maggie/Satan sends them to a remote planet that looks an awful lot like the rocky desert area not far from Los Angeles, until the climax when everything turns out well for everyone.

But it’s honestly not best to focus on the plot of GIRLFRIEND FROM HELL at all, especially as I think it was the least of writer/director Dan (VAMPIRE KNIGHTS) Peterson’s plan. GIRLFRIEND is an excuse to be purely gag-based, and when it’s at its wittiest, it scrapes the heights of being a low-rent BEDAZZLED, as both Satan and Chaser utilize their powers for chaotic flippancy, she causing babies to randomly attack their parents and he pulling random objects out of his coat pocket. The dialogue has moments of cleverness, and Curtis, Ashbrook, Deane and Sarah Katie Coughlan as the squishingly demure Christian girl are certainly up for the job, resulting in more than a few sequences of that are much wittier than they should be. (Diane’s irritation that Chaser hits a girl – despite that girl being the devil – is a high point.) 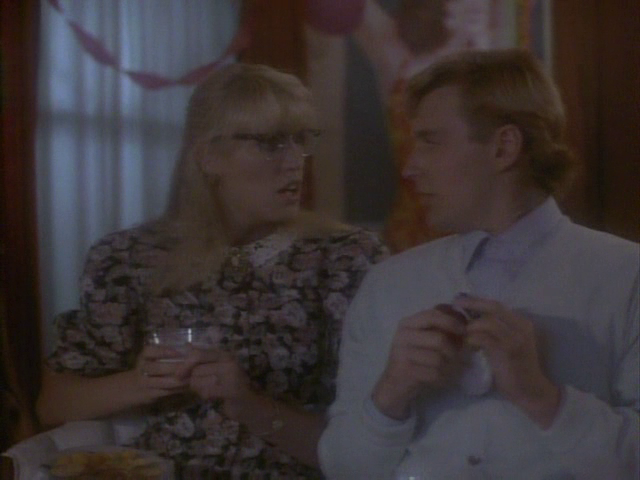 GIRLFRIEND ended up playing on USA’s “Up All Night,” and it’s a perfect home for the film – GIRLFRIEND is practically custom-made for the format. The PG-13 flick has only a smattering of profanity and very brief nudity that could be excised without any problem, leaving about the perfect amount of time for host segments that would have the same sort of ribald charm of the movie itself. The whole film is just a bunch of bawdily whimsical cornball antics with some vague horror elements that essentially make GIRLFRIEND the Up All Nightest of all “Up All Night” movies. It’s bawdy and tasteless and stupid without being mean-spirited and filled with violence or sex that would end up on the editing room floor anyway.

GIRLFRIEND FROM HELL is a goofy, light-hearted exploitation comedy made with the awareness of exactly what a goofy, light-hearted exploitation comedy should be. It manages the trick of being both dumb and witty, and even has a memorable title track (by Eric Jorganson and Carol Bozzno) that plays over the opening and closing credits. It’s ideal for mindless, half-drunken TV viewing in which all you require is that what you’re watching be engaging enough to keep you occupied while you’re waiting for the pizza to arrive. Just don’t try to make any sense of what’s actually happening in it.