Home  ⁄  The Wire  ⁄  ‘IN SEARCH OF DARKNESS, PART II’ IS ENJOYABLY COMPREHENSIVE, BUT STILL MISSES THE MARK

David A. Weiner’s 2019 horror documentary, IN SEARCH OF DARKNESS, was an enjoyable piece of filmmaking for genre fans, a whip-smart look back at a decade that had more than its fair share of amazing, memorable and influential films like A NIGHTMARE ON ELM STREET or FRIDAY THE 13TH. It was made for the fans who worship the 1980s as a decade that gave them horror film alongside their formidable years. It even met its Kickstarter goal back in October of 2018. But even with its length, it still missed a ton of essential movies by focusing on features that had more box office allure and not the ridiculously bad movies that kept the genre afloat with VHS when studios saw less and less profitability for blood and guts. Naturally, a sequel would be the logical next step and while it retains its breeziness, but like any documentary that is as exhaustive and comprehensive as IN SEARCH OF DARKNESS, PART II is, it unfortunately has myriad faults, though none that kneecap enjoyment for the viewers and like the tagline for PIECES says, it’s exactly what you think it is. 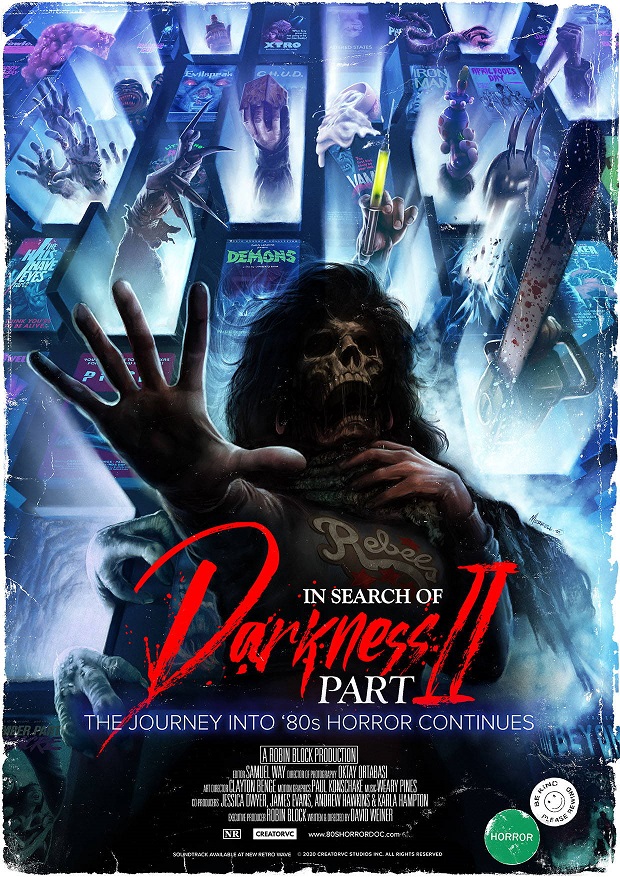 The question of how the filmmakers choose the titles that decide to highlight within a particular year are still a little confusing.  For instance, even as a four-and-a-half-hour documentary about a decade stuffed with genre movies, it stubbornly focuses on more popular horror films (which, yes, has to be done for folks who aren’t as into the genre as other), but one doesn’t need another analysis of A NIGHTMARE ON ELM STREET PART 2: FREDDY’S REVENGE, as its queer horror subtext (or, text?) has been done to death in documentaries elsewhere. Or there’s no reason to focus on two Lucio Fulci movies from the same decade. Every year has such wonderful, obscure films like THE BEING, THE KEEP, NIGHTMARE, or DEAD AND BURIED, so there’s no need to double down on a director’s work. Sure, whether or not a horror fan knows of a particular obscure movie is subjective, not everyone needs to know about every filmmaker and their library of work to be considered a horror fan, but generally, if you’re making a documentary about a decade that is packed with horror films for a sect of fandom, it would behoove you to make unknown titles get their time in the limelight, so you can make this documentary for newbies too and not just playing the greatest hits. 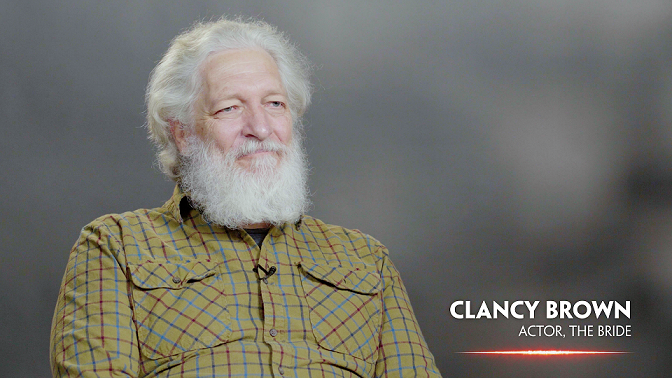 Another thorn in the documentary’s side is its choice of talking heads. While there are journalists and filmmakers who are fairly knowledgeable about The Eighties and the horror films that it offered, who pop in and analyze the films (like its themes – antiheroes, the horror/comedy boom, etc), there are also folks who just have a moderately popular Youtube channel that offer less of the analysis and the memories and thoughtfulness that actors like Clancy Brown bring to talking about THE BRIDE, THE KEEP, or ANGEL HEART. That’s not a bad thing, as most have that nostalgic memory for The Eighties, but one feels they’d rather hear about Kane Hodder talking about playing FRIDAY THE 13TH: THE GAME as a camp counselor (and getting beaten mercilessly by Jason Voorhees) or talking about how he feels blessed to try other genre roles after being pigeonholed as a genre stunt performer. Like in Part One, there’s a particular talking head whose commentary about a title usually amounts to caffeinated newscaster prattling off trivia tidbits and capsule bits from the back of the VHS cover. Thankfully, it’s a lot more limited this go-round. There is something charming hearing from Joe Dante, himself a horror aficionado, talking about his real-deal feelings on GHOULIES and its ilk that slithered out of the financial filth that was spawned in the wake of GREMLINS, and which of the tiny-creature knockoffs that he prefers, or Robert Rusler discussing THE HILLS HAVE EYES, PART II and his thoughts on Michael Berryman. 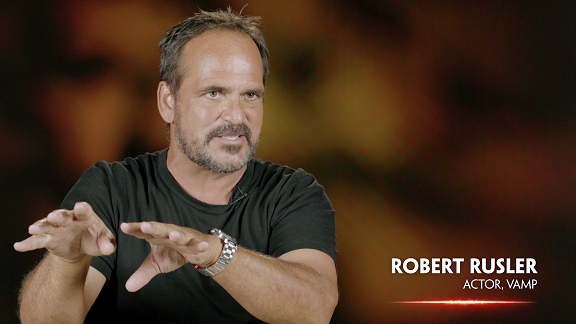 The little interstitials between each decade that focus on actors like Linnea Quigley or Nancy Allen are terrific, because it allows them to tell the stories of their work that they did, their feelings on horror, violence and nudity, since those elements were almost as integral to making genre fare in the eighties as a script and camera. Ditto for the interview segments where they allow for Gedde Watanabe to talk about how refreshing it was for an actor like Kelly Hu to be in FRIDAY THE 13TH PART VIII: JASON TAKES MANHATTAN using her own speaking voice and not a stereotypical accent just because of her nationality. Or Barbara Crampton being candid about how repellent Hollywood and filmmaking in general can be when it comes to female actors who have hit their mid-thirties and aren’t getting the same phone calls they were ten years earlier. 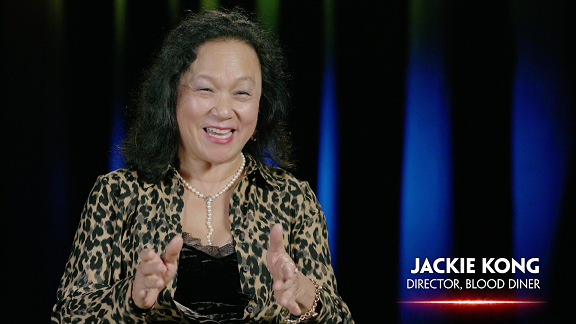 That being said, there really isn’t a need to discuss Tom Savini’s career again, despite his massive profile over the decade. Perhaps the lead-in time from SMOKE AND MIRRORS (a fairly through documentary about Savini’s life) was a little too close to tell to IN SEARCH OF DARKNESS’ but there’s no reason to have Savini rehashing the same stories over and over, especially given the other special-effects rock stars like Steve Johnson, Ed French, or Screaming Mad George slinging latex and blood all over the ‘Eighties. It feels a lot like being at home sick watching Comedy Central and seeing the same comedian tell the same jokes repeatedly, except the only thing that changes is the venue. Though it was funny to hear that Savini worked on an unknown Korean movie in 1982. Also, having a whole segment focused on Italian horror movies from a particular decade is great until you see the director using clips from giallos in the Seventies, especially when the film skirts around a talented filmmaker like Michele Soavi, who worked his way up, suffering grisly deaths in all the wonderful Italian horrors they’ve mentioned, but could’ve used clips from his two great horror contributions, STAGEFRIGHT and THE CHURCH over shots from DEEP RED. 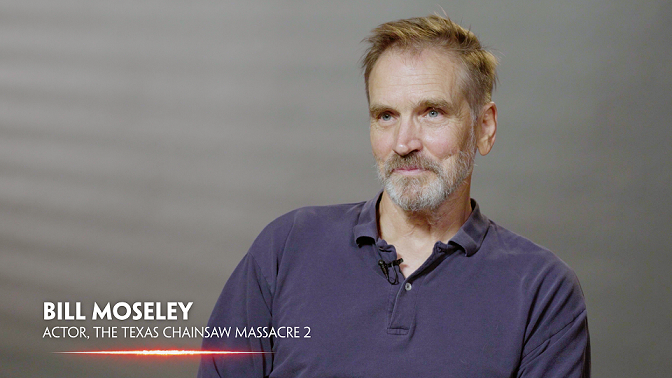 The absolute best part of the film is the stories that the filmmakers tell of their unmade projects, like Mick Garris’ THE FLY II or Bill Moseley’s TEXAS CHAINSAW 3, where the cannibal clan heads to the Rotten Apple to deliver their Lone Star mayhem and comes off as sounding delightfully like a John Waters horror film. It reminds one of projects they remember hearing about in the pages of Fangoria, movies like HOUSE OF RE-ANIMATOR with William H. Macy or SHADOW CONSPIRACY, the Black-and-Dekker mashup with John Carpenter directing a zombie army soldiers attack a small town on Christmas movie. God, it brings tears to your eyes. That lost potential and the filmmakers heartbroken that this thing failed, and brings them bittersweet memories. It’s a terrific beat that Weiner pulls off. 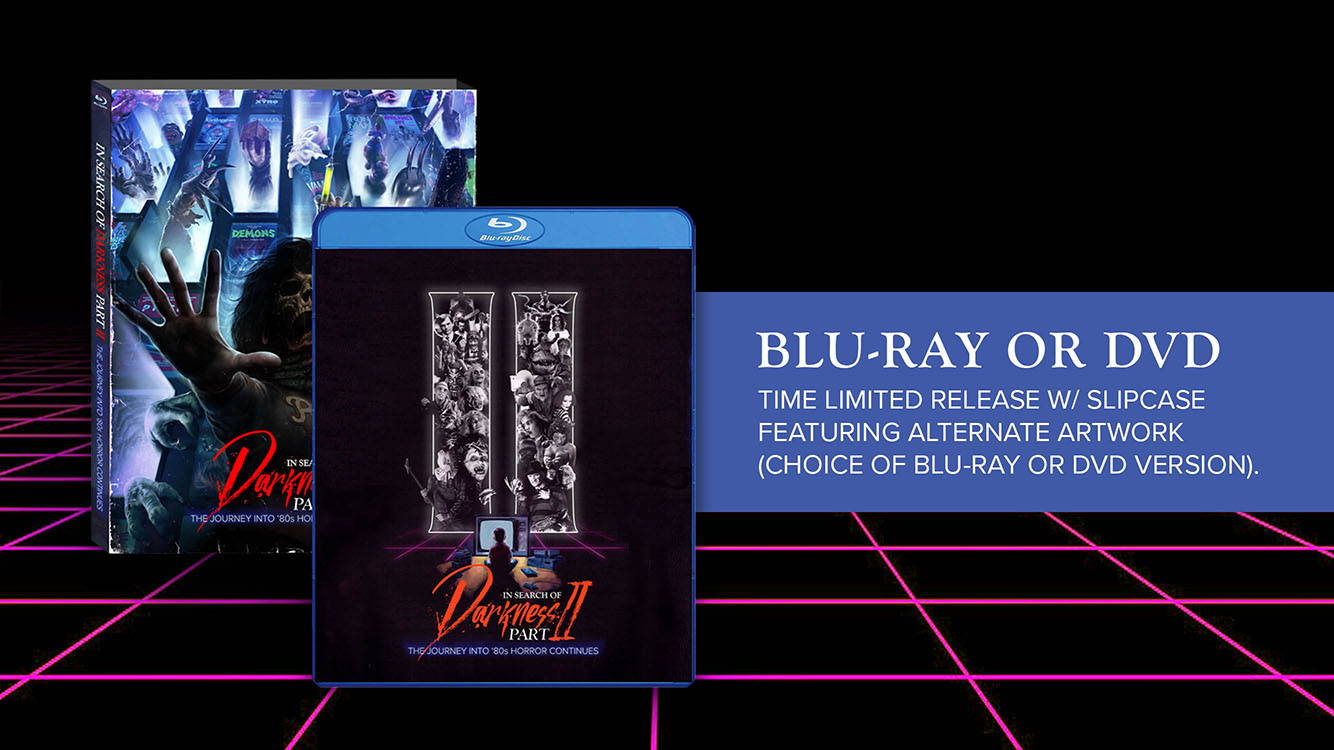 If a third entry to IN SEARCH OF DARKNESS is on the horizon, and there should be one (there is at least a science fiction documentary out there called IN SEARCH OF TOMORROW), one hopes that the filmmakers at least take note on what films to include that would really prime the pumps of the die-hard fans, those of whom feel that the 1980s are a decade that can be extensively mined for more critical and financial analysis, and perhaps a change to some of the talking heads to entertain some freshness and give audiences stories they’ve never heard before. If you’re so inclined, you too can take the journey through the decade of monsters, naked people, slashers, and splatter by heading here and purchasing your own copy of IN SEARCH OF DARKNESS, PART II.