Genre films have really made a mark in the cinematic scene in 2019. Some of the greatest had a wide release and deserve all the praise they are getting. JOJO RABBIT, PARASITE, and US are my top three movies of 2019, but most cinephiles have seen those, as they rightfully should. I’d like to take this opportunity to talk about my favorite lesser known indie genre films of 2019.

10) THE NIGHT SITTER directed by Abiel Bruhn and John Rocco

This film is a Christmas themed horror comedy, a heist film, and it also encompasses the Argento “three mothers” mythos that were created in SUSPIRIA, INFERNO, and MOTHER OF TEARS. I’m a sucker for a horror film that takes place during the holiday season, so this already won me over. THE NIGHT SITTER successfully combines the slapstick intensity of Sam Raimi’s 2009 horror comedy DRAG ME TO HELL with the over saturated, colorful cinematography of Dario Argento’s SUSPIRIA (1977). If you want a fresh and creative take on a holiday horror film and would make a perfect triple feature with KRAMPUS (2015) and BETTER WATCH OUT (2016), then you need to check out THE NIGHT SITTER.

Director Henry Jacobson’s full-length directorial debut BLOODLINE, is a blood-soaked suburban take of the psychological breakdown brought on by domestic violence. Not in my wildest dreams did I ever think I would enjoy a movie starring actor Seann William Scott (AMERICAN PIE), but here I am heaping praise onto him like there is no tomorrow. He fully embraces the psychopath mindset, while still putting the safety of his family above all else. BLOODLINE is a throwback to ’70s crime horror thrillers. The tension and suspense bring to mind the works of director Brian De Palma (CARRIE). Fans of the show Dexter need to check this out! Seann William Scott’s character Evan will be your new favorite anti-hero.

8) THE MUTE directed by Bartosz Konopka

I had no idea what I was walking into when I saw THE MUTE, and I’m glad of that. Everything about this Polish film completely blew me away. It was interesting to watch Christian missionaries try to force their religious beliefs to an uncolonized Pagan community. I do love a period piece, and this film does a great job of showcasing the brutality of the early Middle Ages. The two missionaries try different tactics win over the Pagans. One by force, and the other by dialogue. It’s a beautiful battle between brain and brawn. THE MUTE is an intense mix of high art and low brow exploitation with a strong anti-religion message. Somewhere between the viciousness of VALHALLA RISING (2009) and the visceral imagery of BASKIN (2015) you get THE MUTE.

7) WHY DON’T YOU JUST DIE! directed by Kirill Sokolov

A lot of times when there is a lot of buzz around a film, it’s hard to believe. Everyone that I knew who had already seen WHY DON’T YOU JUST DIE! couldn’t stop talking about it. When Andrei (Vitaliy Khaev), a detective who is also a horribly abusive family man accidentally brings together a group of some of the absolute worst people into his small apartment, chaos ensues. The extreme fight scenes and over the top torture is made all that more palatable by being wrapped in ridiculous comedy. WHY DON’T YOU JUST DIE! is a hyper-stylized, ultra-violent Russian crime drama. Think super bloody, brilliant, chapter-based insanity. If you like early Robert Rodriguez (EL MARIACHI) and Guy Richie (LOCK, STOCK, AND TWO SMOKING BARRELS) films, you’ll love this!

There is possibly nothing I like more in a genre film than one that deals with subcultures. Whether the film has to do with punks, skins, goths, metal heads, or hippies, I will watch it and enjoy it. Being a part of the punk rock community, I’ve always loved a fun punxploitation film, but none actually show the reality of the lifestyle. In director Jason Zink’s full-length directorial debut, he made sure to make realism and authenticity a very important part of this amazing siege film. Seeing our protagonist Brad (Cory Kays) break away from his straight edge crew, and the violence that stems from that is a brilliant and poignant story. STRAIGHT EDGE KEGGER is the most authentic representation of the D.I.Y. scene in a punxploitation film that I’ve ever seen. It’s also a brutal survivalist horror film. For fans of GREEN ROOM (2015) and ROMPER STOMPER (1992).

5) FREAKS directed by Zach Lipovsky and Adam B. Stein

Superhero films generally do nothing for me. That is unless the standard tropes are subverted and turned into something much more horrifying—like in FREAKS. The film undermines the superhero formula with a hallucinatory, cautionary tale of delusion and extreme parenthood. When bold 7-year-old Chloe (Lexy Kolker) defies her overprotective father (Emile Hirsch) and leaves her house, she discovers a bizarre, mysterious world that she had never known about before. In this time of fear and paranoia, FREAKS is a masterpiece of genre filmmaking. The movie mixes the terrifying mythos of Stephen King (FIRESTARTER) and the other-worldly adventure of Guillermo del Toro (PAN’S LABRYNTH) and you get this fantastical movie dealing with superhumans that can control time and space.

“Based on a true story”, is a marketing gimmick as old as cinema itself. It’s hard to fall for this sly trick anymore, but when the film is from Venezuela, and it is so well acted, directed, and shot…it’s easy to believe every detail of it. In THE LAKE VAMPIRE, the audience follows author Ernesto Navarro (Sócrates Serrano) as he is eager to find the theme of his next novel. In a downward spiral of madness, we witness Ernesto follow the tracks of a killer obsessed with drinking human blood and becoming everlasting. THE LAKE VAMPIRE is a true crime exploitation film that is on the same level of SUMMER OF SAM (1999) and ZODIAC (2007). This is a brilliant psychological thriller, for fans of SILENCE OF THE LAMBS (1991) and season one of True Detective.

There is something I will always love about a wacky irreverent horror comedy. The combination of frights and fun is a winning combo in my book. SATANIC PANIC is an ’80s throwback film has the classic set up of the innocent virgin stumbling into the wrong place at the wrong time. In this case, it’s financially struggling pizza delivery girl Sam (Hayley Griffith) willing to take any job, no matter how out of the way it is. The house she goes to belongs to a Satanic cult that just happen to be summoning Baphomet that night and needs a virgin sacrifice. Completely bonkers hijinks ensue along with brilliant over the top gore. SATANIC PANIC is a super campy horror comedy that I can’t say enough good things about. It has a retro feel without being nostalgia porn. Top notch cast, great gore, brilliant story. Just think SLICE (2018) meets STARRY EYES (2014). SATANIC PANIC would make an incredible double feature with READY OR NOT (2019) HIGHLY RECOMMENDED!

2) ANTRUM: THE DEADLIEST FILM EVER MADE directed by David Amito and Michael Laicini

To say that found footage style genre movies are not my jam, is a major understatement. These styles of films are usually hard to watch, cliché, and not much happens. That was the complete opposite with ANTRUM. This film felt dirty, and a genuine piece of occult that should never be watched by human eyes. It’s so hard to explain this movie without ruining its impact on the viewer. There are similar themes between this and John Carpenter’s Masters Of Horror episode CIGARETTE BURNS (2005). ANTRUM starts out as a Satanic panic mockumentary about a cursed film that kills anybody that watches it, and the rest is said film. This is movie is witchy and demonic. ANTRUM is as if you took the gritty aesthetic of Rob Zombie (THE DEVIL’S REJECTS) and the dry tension of Ti West (HOUSE OF THE DEVIL) and mixed them together at a circle jerk hosted by Anton Lavey’s in the ’70s. It’s just that fucking good! 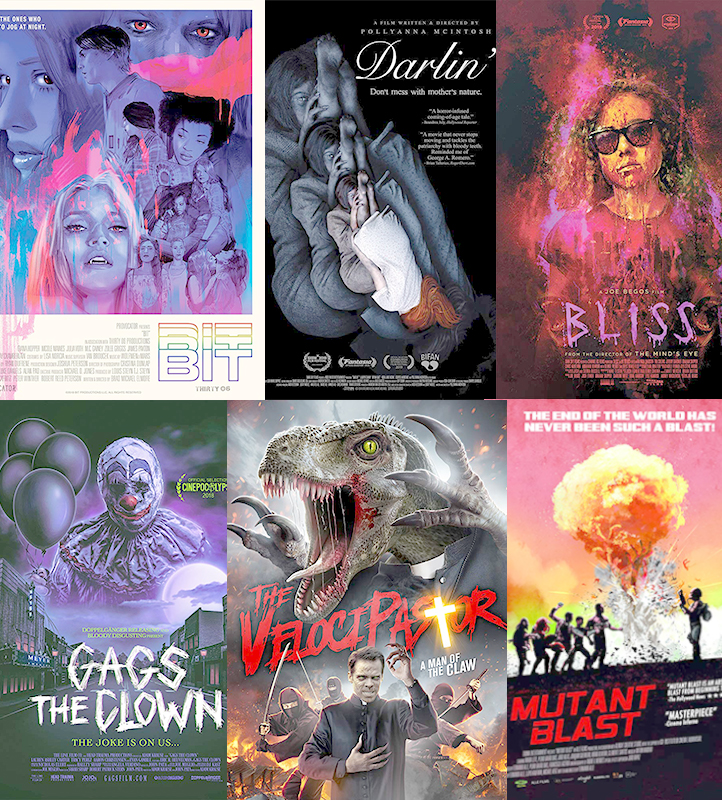