When actor turned director Charles Martin Smith—best known as Terry “The Toad” Fields from AMERICAN GRAFFITI—made his directorial debut with TRICK OR TREAT in 1986, the country was in the throws of what is now referred to as Satanic Panic: the irrational hysteria that Satan’s influence was masquerading under the guise of popular culture; more importantly within the decibels of rock and roll. For parents across the country, it was the sonic invasion of Ozzy Osbourne, KISS, Megadeth, and Skid Row that hid subliminal messages within the waxwork of their influential sound, persuading teens to throw up devil horns and rebel against the system.

In TRICK OR TREAT, this proves demonically true after a local disc jockey (played by Gene Simmons) gifts metal outcast Eddie “Ragman” Weinbaur (Marc Price) the last known record—pressed on acetate to insure the heaviest of sound—of recently deceased rocker Sammi Curr, a hometown heavy metal iconoclast whose music sparked outrage across the country. Ensuring the further immortalization of the rock deity, who died in a mysterious hotel fire, Eddie plays the record backwards, accidentally unleashing a whammy bar of satanic verse that soon begins to haunt his life like a bat out of hell. Unable to control the murderous spirit of Sammi, Eddie and his friend Roger (X-Files scribe, BLACK CHRISTMAS (2006) director, and uncredited co-writer Glen Morgan) must attempt to send the deceased rocker running to the hills once and for all.

While the idea of a found object possessing the infernal power to haunt whoever unleashes their wicked intentions is hardly new—THE EXORCIST twisted the neck of faith after a Ouija board is used, a house was the driving force in BURNT OFFERINGS, while a flesh-bound book is unsuspectingly used to unshackle a force on a group of friends in THE EVIL DEAD (quite possibly the most aped low-budget horror film to date)—TRICK OR TREAT adds relevant layers of social awareness. After all, the commentary on religious fervor and our own immeasurable necessity for senseless items cuts deep within the bloodline of mass consumerism, and as the epidemic of so called ritual abuse spread, it became effortless to point a finger at the very thing that spoke to so many young minds.

In TRICK OR TREAT, that young mind is Eddie, a metal coated outcast who drifts between the school halls under ripped jeans, a denim vest and headphones as if to further exonerate himself from the social death grip that comes with being an individual. His tormentors are your typical upper class inbreeds who conform to the highest order with boat shoes and collared shirts, ridiculing Eddie at every opportune moment. His only solace comes in the form of heavy riffs and the throatal decree of all that is holy. For Eddie, music is his church, its pastor Sammi Curr, and the nights sermon a whiplash inducing headbanger on how to live fast and die young. 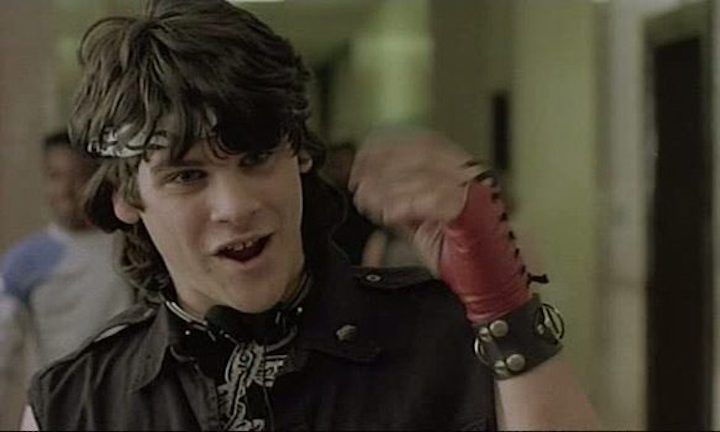 What makes Eddie that much more sympathetic is the films allowance into how he feels, introducing his existence within the suburban stranglehold of Lakeview through narration. He’s a misunderstood teen who rocks his heart on his sleeve, where his voice is treated like a diary of anguish and sorrow. TRICK OR TREAT gives us a rebel yell castaway who speaks through the generalization of your typical metal-head. “Airheads and braindeads are everywhere” writes Eddie, who, like the horror genre, isn’t prone to the disingenuous label of vapid violence and immorality.

Maybe because director Charles Martin Smith’s frequent portrayal of the pocket-protected pariah–the AMERICAN GRAFFITI dweeb going pro as a sympathetic scientist tracking extraterrestrial life in STARMAN–earns his character more affection for the archetype than your average John Hughes fare. Eddie’s vendetta against his tormentors quickly becomes a mission to end Sammi Curr’s vengeful spirit once things become near fatal, relinquishing his albeit unhealthy obsession with the rock god. 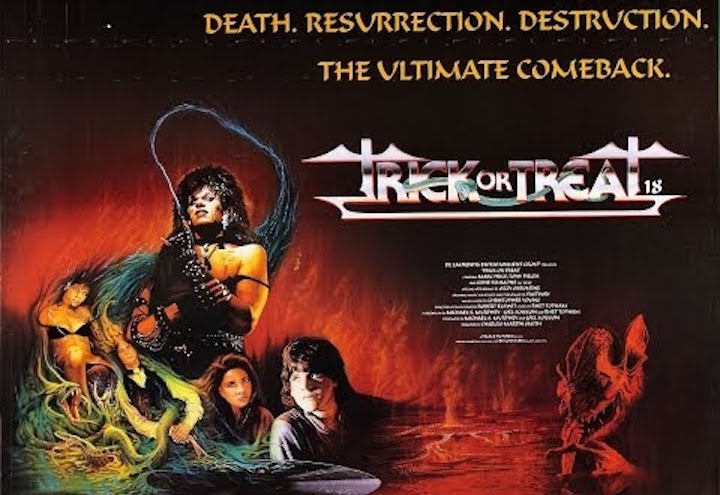 Which is rather befitting of our current climate, where fandom is so consuming that its community can too often feel like a creature of our own doing. Eddie, whose bedroom is splattered with posters of Anthrax and the like, is that soldier of fandom, rejecting any notion that perhaps his genre of choice isn’t any different from the countless mass-consumed noise he aggressively rejects.

Except he’s a character who is written–thanks in part to an uncredited James Wong and Glen Morgan—with much more complexity than toxic fandom or the countless Satanic allegations would ever lead you to believe. Eddie actually feels like a teen who isn’t pigeonholed to the stereotype that frequently begets a genre like horror in 1986; a mere two years after Freddy Krueger clawed through slumberland in Wes Craven’s staple, A NIGHTMARE ON ELM STREET. It’s entirely where TRICK OR TREAT’s production company, DEG (De Laurentiis Entertainment Group), sought to take Sammi Curr after A NIGHTMARE ON ELM STREET’s charred child murderer, Freddy Krueger, helped rack in over $25 million (that’s over $61 million after inflation) on a $1.8 million dollar budget. 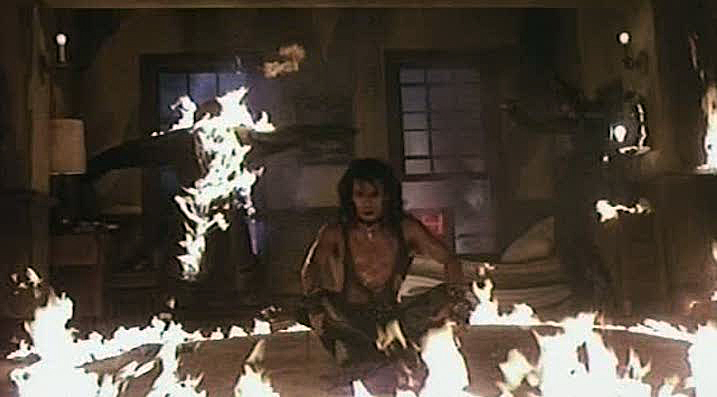 Instead of a ratty stripped sweater and beat-up fedora accompanying the iconic razor sharp fingers of Krueger, Sammi is adorned in studded leather, teased hair, and a Phantom-like burn across his face. Except the royal excess of the opera is replaced with the dimly lit confines of Eddie’s bedroom; befitting since it’s precisely where ELM STREET‘s nightmarish conjuring feeds off the fears of teens. Unfortunately, Sammi never feels as terrifyingly complete as Freddy, even when he’s briefly equipped with a 6-string ax that electrically eviscerates a crowd of prom dressed high schoolers.

Contributing to the glorious marriage of horror and metal—two genres that go hand-in-hand—is a head-throttling soundtrack by the band Fastway, comprised of ex-Motörhead guitarist Eddie Clarke and former UFO bassist Pete Way. It’s a surprisingly thrash-heavy soundtrack, released a month after the film as a studio album, that gives TRICK OR TREAT its tone and atmosphere. In one scene, its music quite literally pours out of headphones as the unsuspecting girlfriend (Elise Richards) to Eddie’s bully (Doug Savant) falls prey to the seductive allure of rock and roll, accompanied by ecto-green fog that begins to undress her before summoning a puppet befitting the world of Jim Henson. 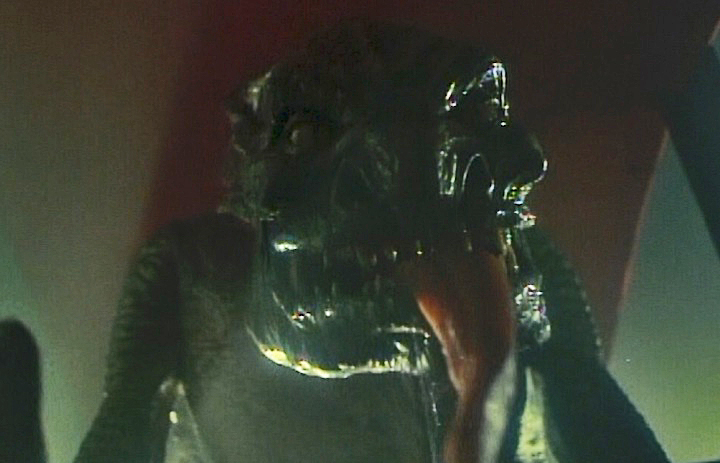 TRICK OR TREAT, like the music that fuels its satanic fire, is an overly ambitious piece of ’80s horror (its little over $3 million budget was never recouped) relying heavily on its own theatrics, but often failing to live up to the fiendish aesthetic and sonic rumble of its voice. It’s a slice of metal and horror that still comes under heavy scrutiny as lurid and hollow, yet are treated here with so much earnest affection that it’s almost impossible not to become swept up in its devilish charm. Sure, it may not carry the longevity and alarming dread of A NIGHTMARE ON ELM STREET (or its unjustly maligned sequel, FREDDY’S REVENGE), but TRICK OR TREAT is just that; a treat for both the horror genre and its fans who feel a deep rooted connection to the influential power of cinema. Rock on!