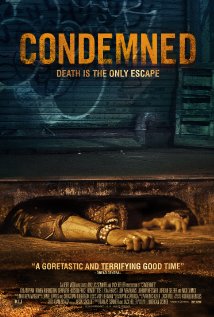 I’m ecstatic over the return of ultra-gory, over-the-top splatter films, or what I like to call S&G (splatter and gore) films, the kind that used to populate the horror section of every movie rental store in the 1980s. Recently, we’ve seen everything from giant pustule boils in the body horror epic CONTRACTED to ridiculous geysers of blood and gore in TURBO KID. CONDEMNED combines every possible vile, disgusting element of these films, cooks it up for you,  shoots it up into your veins, and sets it all to a killer punk rock/industrial soundtrack. I reveled in every second of it!

Right from the opening sequence, where we see an obviously mentally disturbed hoarder who goes by that name Shynola (Anthony Chisholm, a veteran stage actor also recognizable from Oz, PREMIUM RUSH, NASTY BABY, and CHI-RAQ) deliver an almost incoherent monologue on the collapse of society, I knew that there was going to be something special about this film. It gave me chills. I’ve dealt with people with bi-polar and schizoaffective disorder, and Chisholm had every nuance down pat. It was creepy and powerful, and he made for the perfect greeter to welcome an audience to our story’s location of a dilapidated abandoned building. 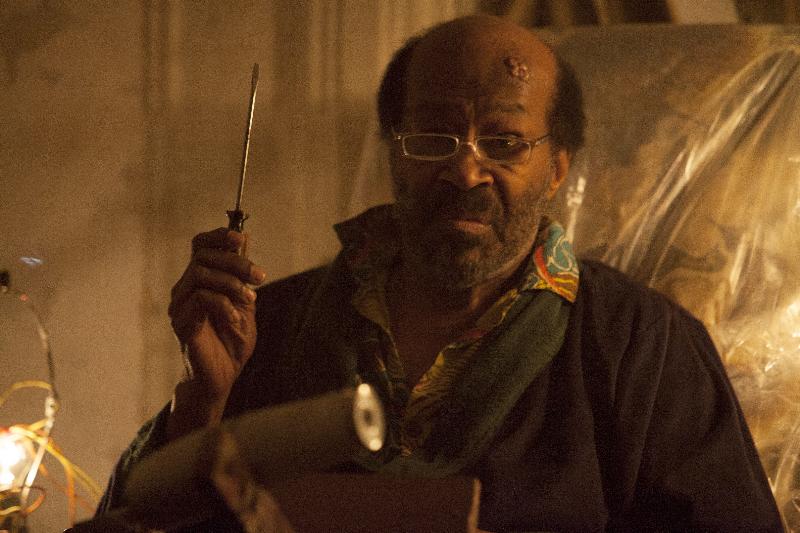 In what almost seems like an alternate reality, set at a beach house in the suburbs, we hear a set of parents having a loud argument and a young girl named Maya (Dylan Tess) on the phone with her boyfriend Dante (Ronen Rubinstein). Dante convinces the innocent and naive Maya to run away to the city and live with him. Being so sheltered, she somehow believes that this is a good idea.

When Maya shows up with Dante to his place, she discovers it’s an abandoned building. He’s living in a squat with a bunch of degenerates. Fucking culture shock time! Things go from bad to worse as Maya meets the neighbors. All the characters that live in the other apartments in the squat are so demented, it feels like some sort of crazy Harmony Korine film. First you have the hardcore gay S&M couple Gault (Johnny Messner) and Murphy (Michael DeMello). Then you have the junkie hipster Dante (Jon Abrahams) and his junkie model girlfriend Tess (Lydia Hearst). To add to the madness, you have Big Foot (Jordan Gelber), who is a Hasidic Jew who left his wife and family to live with his crack-whore tranny hooker girlfriend Roxy (Kevin Smith Kirkland).  All of the madness was great, reminding me of the bust outs in the classic splatter film STREET TRASH. It all had a hyper realistic feel to it, very trippy. 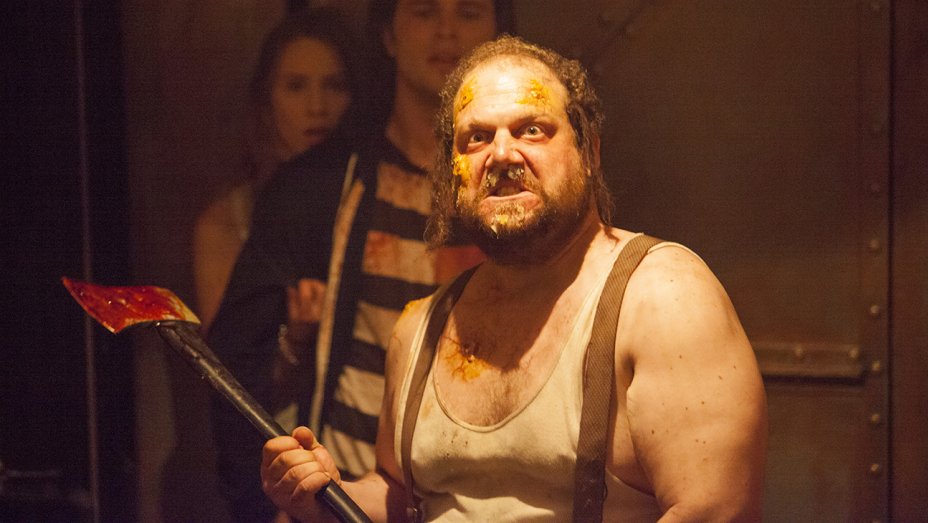 Also living in the squat is an old Asian drug dealer known as Cookie (Perry Yung), so named because he sells baggies of his drug smuggled inside fortune cookies. There is never a name given to this drug, but it seems to be some sort of combination of meth, PCP, krokodil, and bath salts. The fumes from it are getting into the air vents, and everyone in the building is getting sick. The close ups of the resulting projectile vomit were stomach churning, and at the same time awesome! Just what I’d hope and expect from a movie like CONDEMNED. 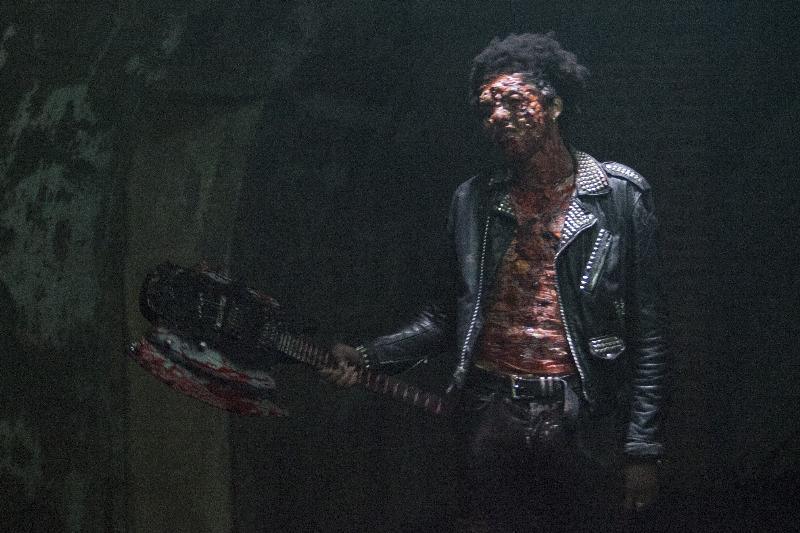 Once Cookie leaves the building to deliver some drugs, he locks everyone inside and the madness really begins. There is a great claustrophobic feeling to the movie from there, similar to that in [REC]. As the already twisted cast of characters get sick from breathing in the fumes of Cookie’s drug, they start having hallucinations. The digital hallucination effects instantly brought to mind RED NECK ZOMBIES. Nothing good could come from this, but plenty of awesome did! 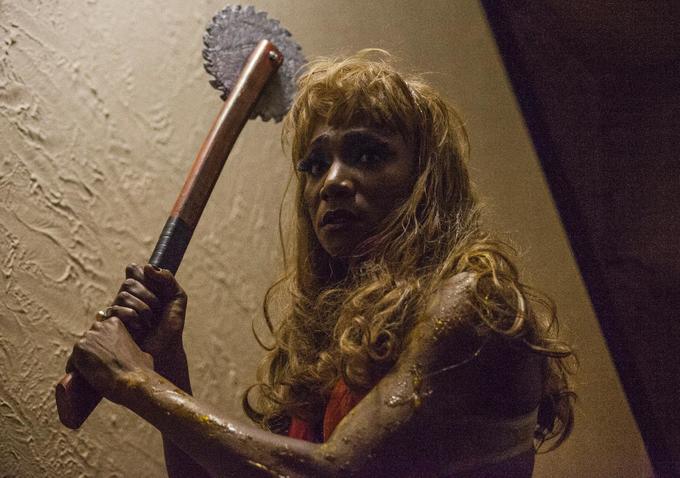 Even as the tenants of the squat are getting hacked up by each other, Maya (our suburban princess) doesn’t get it. Life is cheap and fast, everyone is self-centered, and nobody is coming to help. I think this probably the best portrayal of New York’s seedy underbelly I’ve seen since MULBERRY ST.

Even as vile and repugnant the movie got, it still had some genuinely funny lines. Everything about CONDEMNED screamed punk rock. Even the singer of the thrash punk band Cerebral Ballzy was in it, as Dante’s roommate Loki!

CONDEMNED could have been a case of Alice through the Looking Glass, with the level of severity of Maya’s culture shock, and I dug that. Seeing her try to escape the squat filled with zombie-like infected scumbags who were almost melting in front of her was a great mix of THE CRAZIES, NIGHT OF THE DEMONS, and PLANET TERROR. 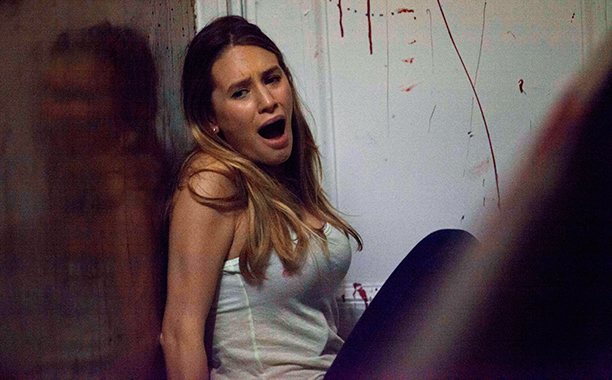 With all the vomit, diarrhea, blood, guts, and gore, CONDEMNED is not for anyone with a weak stomach. Here’s one for the true gore hounds!!! 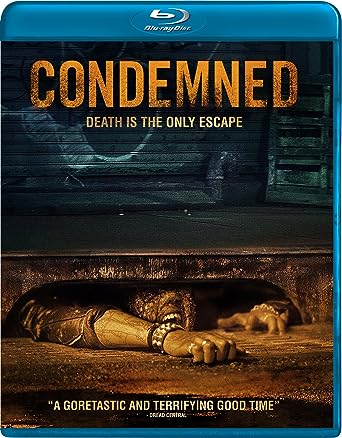