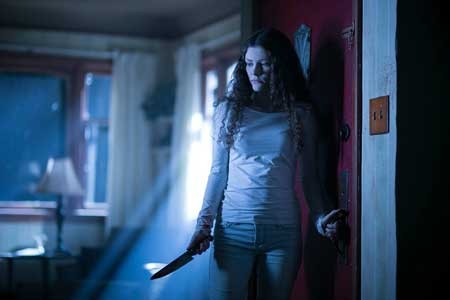 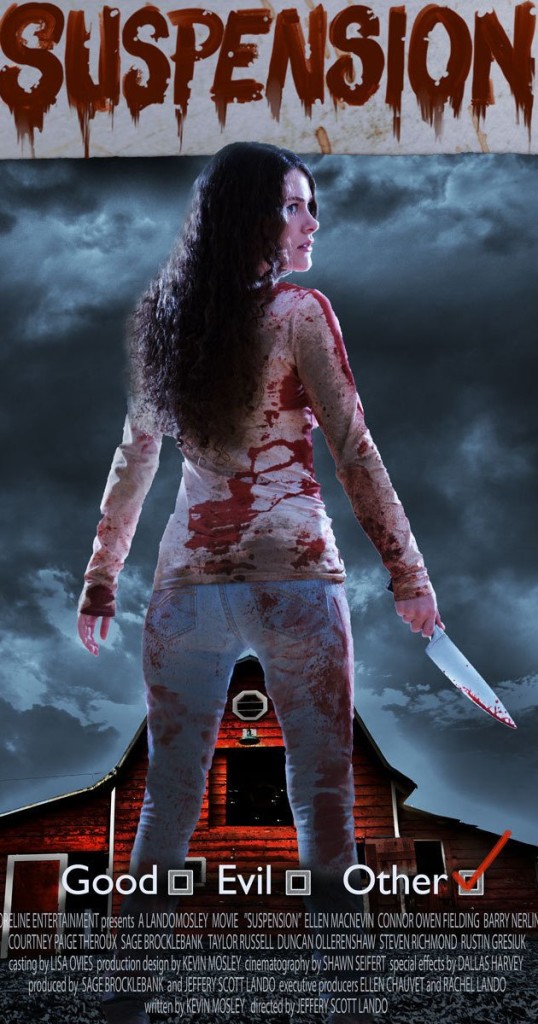 There are only so many times a singular plot device can be used before your average movie fan can sniff it out and realize what the big twist is going to be at the end of the movie. Unfortunately, SUSPENSION crosses familiar territory, using mental illness as a cornerstone of the plot. This terrain has been tread brilliantly in films from the classic Alfred Hitchcock film PSYCHO, all the way to the lackluster 2005 HIDE AND SEEK (which I figured out just from watching the trailer).

SUSPENSION opens up promisingly, with some interestingly-designed credits. They’re presented like a comic book, with some ‘nineties alternative rock in the back ground. I like that style — it reminds me of Kevin Smith’s early work. Speaking of the ‘nineties, we cut next to an internet torture show which was very reminiscent of FEARDOTCOM and STRANGELAND. Seems promising, go on. Oh wait, it’s just a dream sequence. Damn you, dream sequence… I want some torture!

Oh well, our lead is established, a female character named Emily (Ellen MacNevin).  You can tell that Emily has been through some traumatic shit, and to help deal with it, she daydreams and draws some really gruesome art during school. Said daydreaming and then an outburst in class leads Emily to the prinicipal’s office, where she receives a suspension, hence the name of the movie. I don’t care how damaged she is — MacNevin is playing this character to a tee, and I love a strong female lead in a horror movie! The bullies in SUSPENSION are pretty typical, like updated versions of the ones we’ve seen in for years in horror films, since 1976’s CARRIE. Doesn’t matter, I still can’t stand bullies, and I’m fully looking forward to them getting killed. 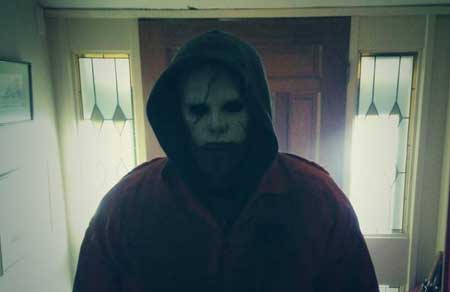 Due to the interactions of the Emily’s family members, you can tell that they have a dark past and that something remains very off about them. The town sheriff, Sheriff Mitchum (Duncan Ollerenshaw) is a friend of the family, and he wants to be able to take care of them in their time of need. SUSPENSION is very dark — figuratively and literally. The color scheme and lighting are very stark, which gives the story an increasing sense of dread. 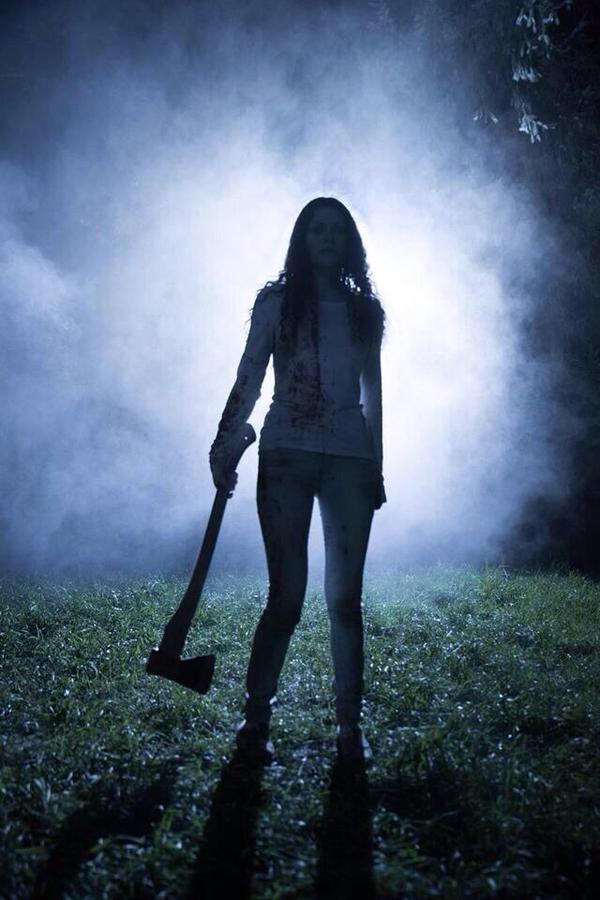 Right away, I got a weird feeling about the Emily’s mute little brother Jeremy (Owen Fielding). Is he really there? Is he real? Can anybody else see him? Is his plot really this easy to figure out? It really can’t be! The characters feel very much like something inspired by TALES FROM THE CRYPT, something meant more for cable television. 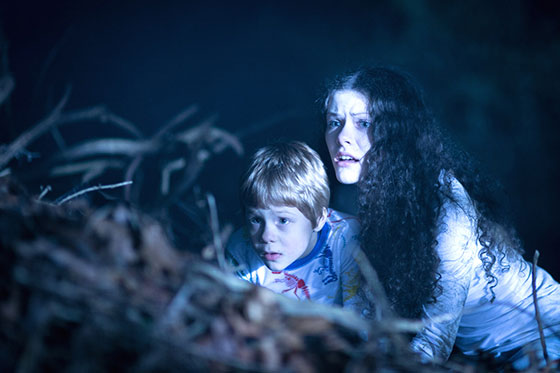 It doesn’t help that so far, all the gore and action scenes (which are pretty brutal) all happen during the cartoony fantasy scenes. You can tell that these dark fantasies of Emily’s come from events in her real life, though, and it seems like the lines are being blurred between fantasy and reality for her. Send in the town deputy, Deputy Jacobs (Sage Brocklebank) for some comic relief. [Police as comic relief is a tired film trope that I can do without, but I digress.] I still can’t help but think the little brother isn’t real, but it’s too expected. That really can’t be the case.

Once again similar to CARRIE, the lead bad-bitch Theresa (Courtney Paige Theroux) has a soft hearted boyfriend named Jason (Steve Richmond) who you think at first is a good guy who wants to help out Emily, but it turns out he’s just a scumbag and is just as bad as the others. When Jason leaves Theresa’s party to make sure that Emily is okay, he comes on too strong. This somehow prompts the killer, the one that Emily keeps drawing, to become real! Let the carnage begin! 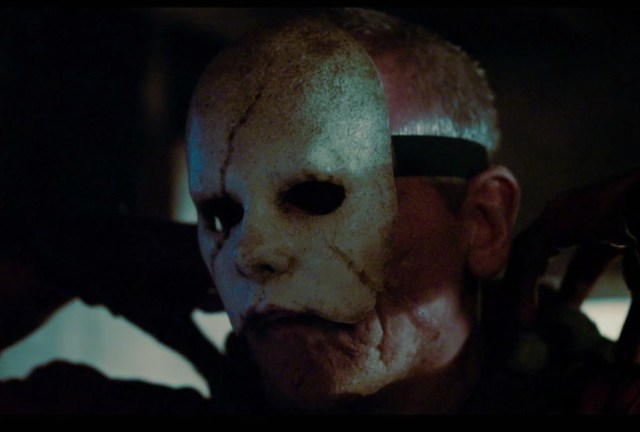 We discover that the killer is supposed to be Emily’s father, and he’s dispatching all those who mess with his family in a very bloody and gory ways. All the characters are horrible humans, so good riddance. 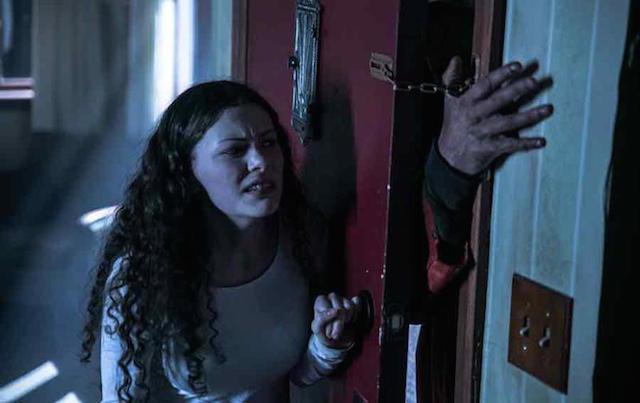 Well, everything in SUSPENSION is familiar territory. There is absolutely nothing original here, but is there ever? If you are a horror fan, you’ll figure out the big twist within the first five minutes of the film. If that doesn’t matter to you, and if you just want to have some fun and see some blood, some gore, and some teenagers massacred, then check out SUSPENSION.
RECOMMENDED.