Empathy is wisely regarded as a major virtue for humanity. Only by being able to understand how someone else is feeling and the struggles that others endure can large groups mobilize or people in power move forward to enact Good works. It’s a tie that binds close friends and generally opens up minds to different ways of thinking beyond myopic homogeny. But those who seek power and therefore claim they understand the pain of others can also weaponize it. Like most elements of life, our greatest strengths in the wrong hands become great tools of destruction — instead of bringing everyone together, it divides; instead of elevation, it leads to further subjugation.

The double-edge possibilities of empathy are in full swing in Ari Aster’s MIDSOMMAR. The writer/director of HEREDITARY returns for his second feature film, which he also both wrote and directed, and examines how the need to be understood on a deep level can be a powerful tool in the hands of some.  Casting aside the shadows of his debut feature, this is a tale told in direct sunlight — even late at night due to its Swedish location — but also involves hidden secrets that have metastasized throughout decades. Once again, Aster proves himself a very talented director with bold use of imagery and astounding performances from his gifted cast. Unfortunately, he struggles with the writing aspect and is unable to avoid clichés or subtext that probably feels radical to rebellious teens but few others.

Christian (Jack Reynor) is planning on going to his friend’s, Pelle’s (Vilhelm Blomgren), home village of Hårgan in Sweden for its special seasonal festivities. It will be a boys’ vacation as the two are accompanied by Josh (William Jackson Harper) and Mark (Will Poulter) — all four being students working on finals and theses. But following a tragedy, Christian brings along his girlfriend, Dani (Florence Pugh), even though most aren’t comfortable with that and their relationship has never been a very strong one. The Americans travel to the rural Scandinavian commune, finding a close-knit group that act as family for each other and observe ancient rituals that appear derived from nature. But these rites are much more intense than the visitors expect, coupled with copious amounts of psychedelics, which lead to divisions within the group as horrific events unfold.

Aster is truly a gifted director. Even though I didn’t like HEREDITARY (yes, I know I’m on a very small island with that opinion), I always recognized that it was perfectly directed. The composition of shots, coordination of production design, ability to naturally switch tones through imagery and sound are masterfully conducted in a way that should make filmmakers with ten times his experience jealous. He is able to get astonishing performances from his actors — all of them delivering believable work no matter the outlandish circumstances by staying rooted in real and recognizable emotions. And all of the actors, the main group and the residents of Hårgan, have moments to shine and show multiple sides and depths to their characters. Reynor stands out as the feckless Christian who is constantly blowing any opportunity to be a stand up person, as does Pugh as the devastated Dani who is navigating so many different feelings that eventually will overtake her. There is probably no more promising a director out there, in any genre, with as new a filmography as Aster. 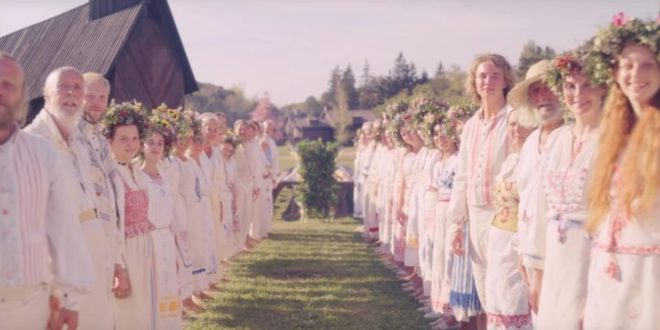 Unfortunately, Aster the writer is a different matter. MIDSOMMAR has clever dialogue and also has the most realistic portrayal of a mushroom trip (not just in visuals, but the kind of conversations one has on them) ever put on film. The characters, the featured ones anyways, are written fairly well so they feel like real people. But the narrative is incredibly simple and frankly more than a little tired in the horror genre. Whereas his debut ended up becoming unnecessarily convoluted with the dizzying steps a cult had to take to awaken its demons, in stark contrast, most events that experienced horror viewers think are going to happen will eventually happen. There are a few curveballs and the specifics of how they occur will differ, but through a combination of heavy handed foreshadowing and utterly familiar storytelling, the die is cast for the entertaining but mostly reprehensible American lot. Cliches about people disappearing with vague excuses are used, and never questioned in any manner. This culminates in the film feeling like an arthouse version of HOSTEL or CANNIBAL HOLOCAUST, with detached westerners coming in to judge a different society while displaying their own horrible ways. Or a psychedelic WICKER MAN in which reality is morphing due to language barrier and drugs, but the isolated location proving a mystery that the newcomers are slow to untangle. And sometimes that’s fine to be a pastiche of other, beloved films; even if viewers know where a story is going, it’s all in the telling. But there really isn’t much from a story beat perspective that is surprising or engaging, instead relying on visuals and intense performances from the cast to try to keep people invested.

J’Onn: What do you know of my pain?

But to Aster’s credit, and like those three classics mentioned above, MIDSOMMAR is about something and has subtext. It isn’t an excuse for pastoral gore or arcane mythbuilding, but is a deliberation on religion. Spoiler alert — the movie suggests he is not a fan. Awful rituals are carried out because of tradition, and rules are rigorously adhered to as dictated by their prophet, an inbred mentally challenged person who does chaotic finger painting that is interpreted by the elders. Hårgan residents pride themselves on their empathy, with all feeling pain if one does — wailing in response to the physical trauma another is experiencing. But it’s performative, it’s bait; they don’t know the actual pain people are feeling in that moment. However that lure of a tightly knit community that prides themselves on being so interconnected that they acknowledge and validate each other’s emotions to the point of seemingly carrying the burden, can be very tempting to those that feel forever distant or misunderstood. 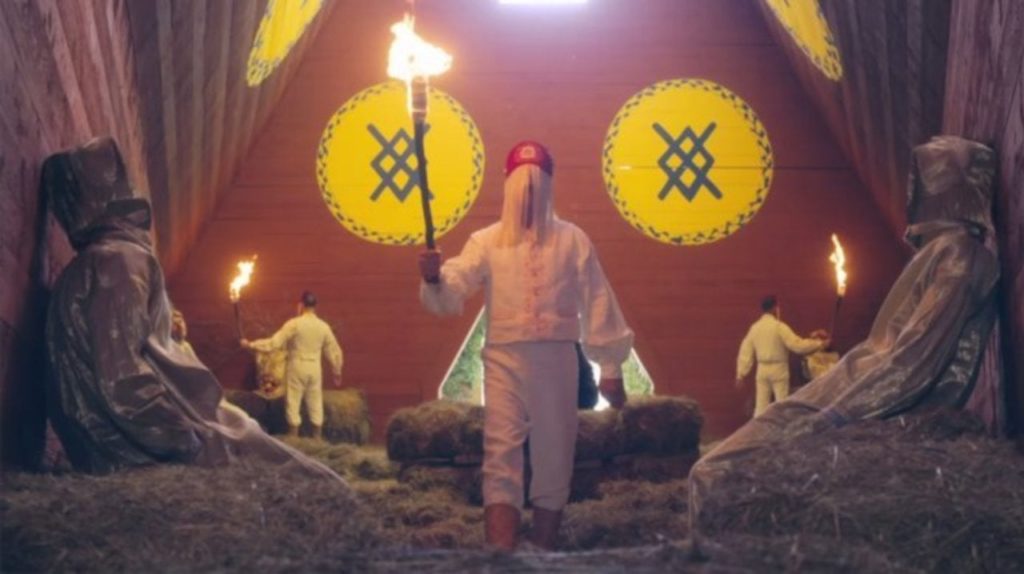 And while it can be therapeutic and empowering to be lifted up by people, those that fall for the empathetic spin and sense of closeness do so while being willingly blind to the more troubling elements. In MIDSOMMAR, religion hijacks empathy to bring in members and uses sweet words that make some sort of internal logic to excuse horrific deeds, all dictated by a fool in the corner. It is a layer beyond the surface and shows some meditation, but it also feels like the defiant and blunt rebellion of a teen that read Nietzsche for the first time or heard some transgressive song that totally challenges the status quo, square. Aster is commended for making a deeper point, but it’s nothing that feels clever or innovative in any way.

MIDSOMMAR will most likely be loved by most people (horror folks, anyways). Everyone at my screening was wowed by it and social media suggests that the horror illuminati are gaga for it as well. And there are a ton of reasons why! As mentioned, Aster directed the HELL out of it and there are so many gorgeous elements and specifically well done aspects that will linger. But ultimately, it’s all been done before and, despite the sun-drenched Scandinavian trappings and attempt at a smart dig on religion, it feels too familiar and on the rails which takes away any sort of elements of surprise or real ingenuity. Aster remains an impressive talent, and I will continue to look hopefully to his next projects because of that; but it may be more successful for him to come up with a story and hand off script duties to someone else. The director has many strengths, and one of them is empathy; he understands pain and trauma, and how those elements take root in a person. It would just be nice to get a narrative that reflected that understanding without too many asterisks.