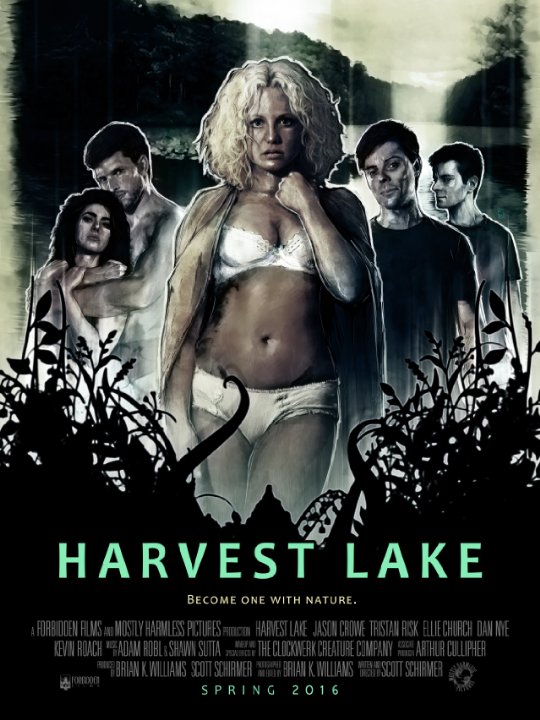 HARVEST LAKE has arrived early on VOD — you can check it out over at Vimeo starting today. Since Daily Grindhouse has a soft spot for creature-features, not to mention many of us having appreciated director Scott Schirmer’s previous feature FOUND., we’re happy to encourage our readers to give this indie-horror flick a look. And since we’re lucky enough to have one of its talented stars on speed-dial, we had Jason Coffman talk to the inimitable Tristan Risk about her role in the film:

Jason Coffman: Could you say a few words about HARVEST LAKE and your character by way of introduction?

Tristan Risk: Certainly. HARVEST LAKEis a strange marriage of THE DARK CRYSTAL meets ENTER THE VOID meets INVASION OF THE BODY SNATCHERS, and my highly-sexed character, Cat, is an accelerant in the carnal frenzy that takes place.

Jason Coffman: How did you come to be involved with Forbidden Films/Mostly Harmless and HARVEST LAKE?
Tristan Risk: It’s all Ellie’s fault.
I kid, Ellie and I had worked together twice previously, and I was a fan of Mostly Harmless Pictures’ TIME TO KILL. It was an awesome throwback to old-school grindhouse revenge flicks. So when I got the chance to work with Brian Williams and Ellie again, as well as Scott Schrimer after seeing FOUND. and Headless, I jumped on it.

Jason Coffman: You’ve recently appeared in Astron 6’s THE EDITOR and are in James Bickert’s upcoming FRANKENSTEIN CREATED BIKERS, among many other genre films, including your amazing work in the Soska sisters’ AMERICAN MARY. How do you choose films to work in, and what in particular attracted you to HARVEST LAKE?
Tristan Risk: Usually I’m approached by the filmmakers, and I’ll have a read of the script. I’ve lots of love and respect for the Soskas, Astron 6 and James Bickert’s previous work. It usually starts as something of a crush on their work, and then the stars line up, and we get to work on things together. This script was nothing like Scott’s previous work, and it was a chance to do something a little weird and a little sexy. Those happen to be two of my favourite things.

Jason Coffman: The practical effects in HARVEST LAKE are really interesting and imaginative. Did you and the rest of the cast get to “taste test” any of the weird secretions from the plants to help figure out what they should taste like, or were you all at the mercy of the effects department?
Tristan Risk: Lordy, no! I’ve eaten enough psychedelics in my day to know well enough when to leave alone. Which is kind of weird, since I am the worst for eating the fuzzy toffees I find in between the couch cushions. The effects department was awesome though – they created all these magnificent creatures. It felt like I was in a kinky Jim Henson film. Actually, if Jim Henson did erotica, this would like have been a similar product. Luckily though, I didn’t have to have any of the goo in my mouth. To this day I remain blissfully ignorant of what the boob fruit juice actually tasted like.

Jason Coffman: What was the shoot like on HARVEST LAKE? What kind of directions did Scott Schirmer give you? Anything particularly bizarre and/or memorable?
Tristan Risk: Yeah, we were shooting on location at a lake and Scott, being the good director he is, got into the water along with us. However, there were a number of leeches that also shared the water with us. Both Scott and I got leeches on us, but I kind of punched mine off and he, well not so much. He’s very endearing when he’s upset, I’ll say that much. But it’s a testament that he was getting down and dirty with us as a person.
He’s very organic to work with, so there was room for flow and flexibility. That’s pretty key when working with someone, and his directions during Ellie and I making out were awesome. I’d gotten a headlock and I was trying not to suffocate and ruin the shot. Scott walked us through that, despite my being at Death’s Door, and gently requested that I don’t push myself and die. He got the best of me when I was feeling the worst and THAT is tricky, because when I get sick, I turn into a big wimp.

Jason Coffman: I’m from Indiana, so you have my sympathy for having to spend any significant amount of time there. Did anyone happen to bring a sugar cream pie, the official state pie of Indiana, to the set?
Tristan Risk: No, but we did have a cast wind-up at a local gay bar, which made me quite happy, and we also had a trip to the local 24/7 Adult store, which was fun too (what can I say? I’m a sucker for a sex shop). I was distressed to learn that we were in the same town that Grumpy Cat lives in, and I missed seeing her furry face in person, potentially. But then again, there might always be a next time….
Check out Jason’s look at HARVEST LAKE!
Check out Tristan Risk’s archive here at Daily Grindhouse!
Find out more about how to see HARVEST LAKE here: