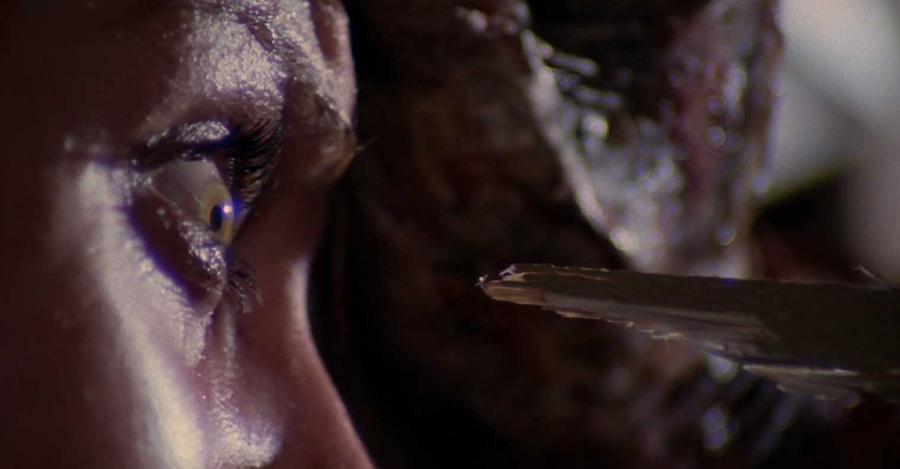 Bites to the jugular

Bites to the face

Director Lucio Fulci is a visionary of genre. With works spanning from giallo (DON’T TORTURE A DUCKLING) to spaghetti western (MASSACRE TIME), he has achieved a godlike status with the grindhouse crowd in his decades-long filmmaking career. Three of his films made it onto the core list of 72 Video Nasties, the earliest of which is ZOMBIE FLESH EATERS. The opening 20 seconds has the audience staring down the barrel of a gun as a shadowed figure points at the camera and waits patiently for a bound and shrouded body to rise from a nearby slab. The figure blasts a golf-ball-sized hole in the head of the undead body. So goes the beginning of Fulci’s career-renewing 1979 work, ZOMBIE FLESH EATERS.

Elisa Briganti and Dardano Sacchetti’s screenplay offers a straightforward, no-nonsense narrative: A woman and several acquaintances embark upon a search-and-rescue mission for her missing father. They discover an island full of zombies, and things pan out poorly for the group. Fulci’s zombie shocker comes in the wake of George Romero’s 1978 undead classic DAWN OF THE DEAD (in fact, the title ZOMBI 2 was a blatant effort on producers’ part to capitalize upon the success of DAWN, released in Italy under the title ZOMBI), though the films could not be more different in style and substance.

Fulci is consistent in both his strengths and his flaws; what his films lack in character development (Tisa Farrow, Ian McCulloch, and Richard Johnson have nothing to work with, script-wise) and plot, they make up for in stunning visuals and uncanny effects work. But it’s that very suspension of narrative that allows for absolutely bonkers scenes like the shark-versus-zombie underwater throw-down that occurs in ZOMBIE FLESH EATERS. A truly awesome stunt for its time, the scene has enough of a ludicrous concept and effective execution that, paired with Auretta Gay’s inexplicably nude body swimming around moments before, makes for an unforgettable viewing experience.

Special praise is due to stunt-man Ottoviano Dell’Acqua as “Wormface” from the film’s climax, as well as Fabio Frizzi, who scored ZOMBIE FLESH EATERS and went on to compose music for later Fulci works, CITY OF THE LIVING DEAD and THE BEYOND. According to the soundtrack notes on Frizzi 2 Fulci: Live at Union Chapel, Frizzi’s composition “Seq. 6“, created for the eye-impalement scene, drew inspiration from The Beatles’ 1967 song “A Day in the Life.” The score also included an infusion of Caribbean melodies, which were intended to “pleasantly deceive” the audience into a sense of security throughout. Simply put, the film delivers payload on every front one could hope for in a Video Nasty — score, atmosphere, carnage, shock value, and pure entertainment. 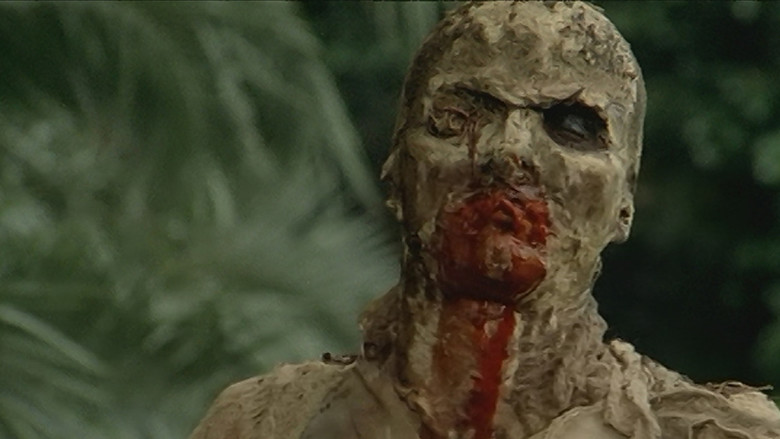 ZOMBIE FLESH EATERS begins with a confrontational scene and, for the rest of its 91 minute runtime, refuses to allow the audience to get comfortable. These aren’t the ambling blue-green zombies of Romero’s works; the zombies herein are far less human and far more ugly, with worms crawling over their face and skin hanging in flaps dripping with blood. The film features many now-infamous gory scenes, including a disgusting eyeball penetration complete with oozing optic fluid. Giovanni Corridori deserves major accolades for the gruesomeness he and the special effects team brought to film audiences in only a small handful of moments. The team delivers on Fulci’s tension-building with a disgusting payoff in each zombie scene. Not only do we see the victim’s wide eyes as she’s slowly lowered onto a splinter of wood, but we see the splinter get closer and closer, until we finally get close-up, onscreen poking through the eye, complete with excruciating sound effects. The same goes for a zombie flesh feast and a showdown between a determined zombie and a shark; it’s light on the editing and heavy on the goods. There’s plenty of blood, brains, and unnecessary nudity to go around, and Fulci keeps the camera rolling all the while. 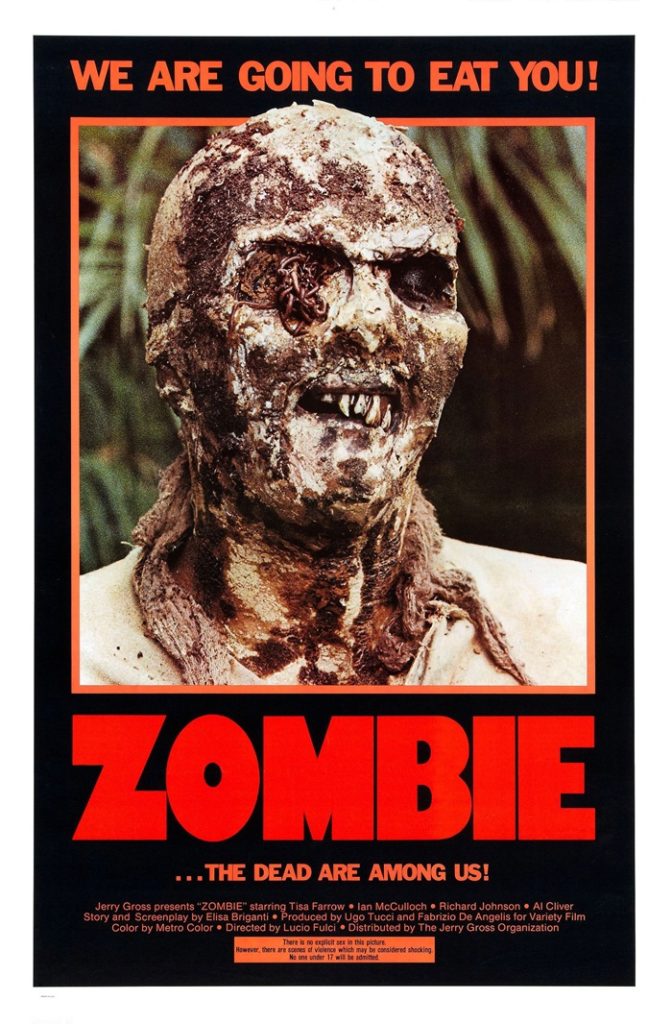 Naturally, such nasty elements as cannibalism and dismemberment were sure to tick off the BBFC, who originally gave the film an X rating and still cut nearly 2 minutes of footage. Once the Video Recordings Act of 1984 passed, Fulci’ film was promptly banned and removed from the DPP list due to multiple graphic scenes. In North America, Fulci followed Romero’s lead after DAWN OF THE DEAD’s release and opted to release his film without an MPAA certificate, rather than letting them slap an X rating on the film. Promoters thrived on the publicity, arranging for theaters to distribute barf bags to film-goers about to see the movie their friends warned them about. ZOMBIE FLESH EATERS earned nearly seven times its $410,000,000 budget, riding the wave of infamy. The film featured multiple taglines aimed at the grindhouse crowd:

When the earth spits out the dead, they will rise to suck the blood of the living!

If you loved ‘Dawn of the Dead’, you’ll just eat up ‘Zombie’!

We Are Going To Eat You!

The dead are among us.

They will rise to suck the blood of the living!

When the earth spits out the dead…..They will return to tear the flesh of the living.

ZOMBIE FLESH EATERS launched the zombie-gore trend in its home country, and is high on the list of the greatest zombie films of all time. Like BLOOD FEAST, it’s a Nasty that fans watch simply to be able to say they’ve seen the . It wasn’t passed uncut in the UK until 2005 but the film is currently enjoying critical praise that finally matches its box-office profit. As with all of Fulci’s horror works, ZOMBIE FLESH EATERS holds up as one of the bloodiest and most fun efforts that the genre has to offer. 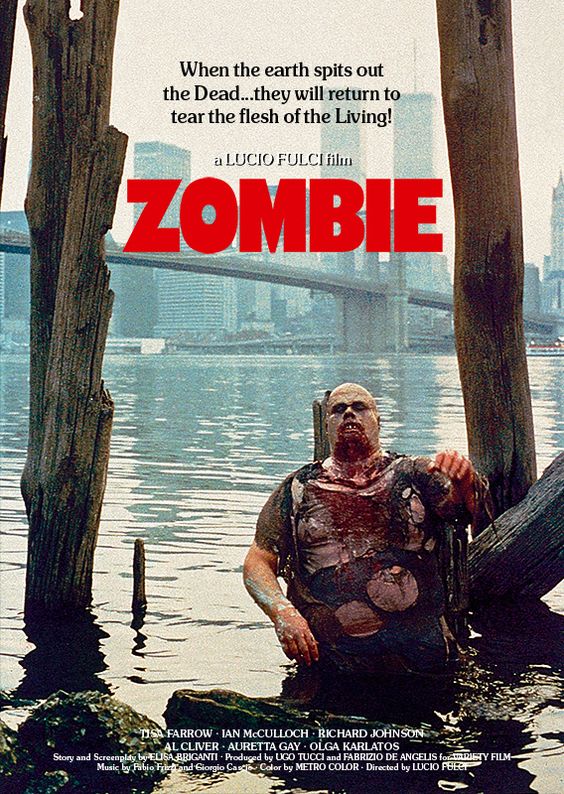