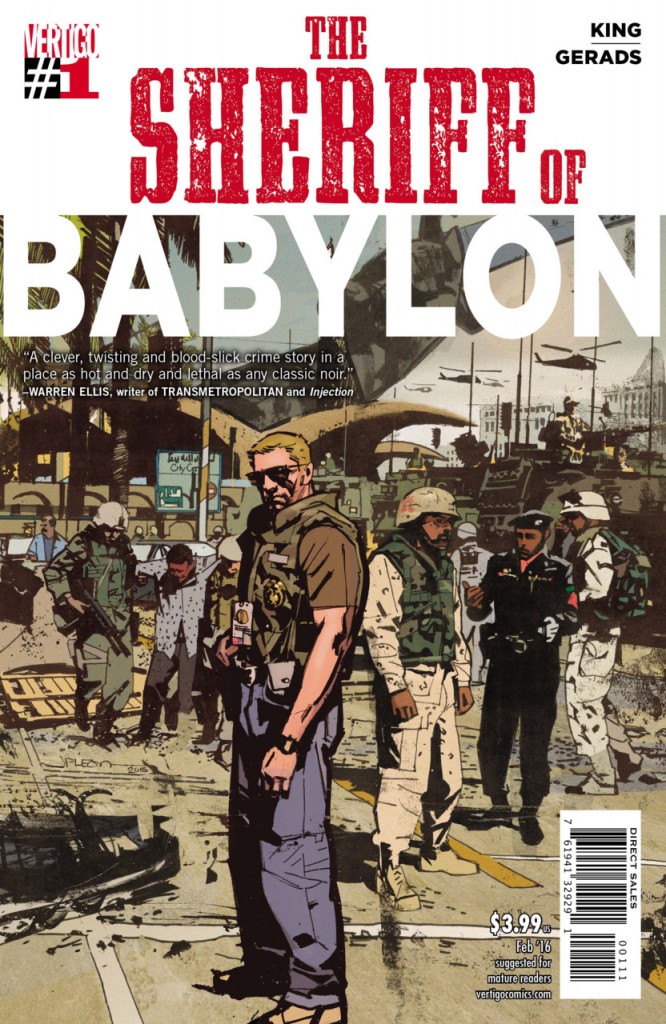 It’s nothing to do with the guy’s personality, mind you — he could be the life of the party for all I know, or a humble and gracious gentleman, or a devoted family man, or all three. I’ve never met him, so I couldn’t tell you. But the idea of Tom King, well — that’s what makes me a trifle apprehensive, I guess.

There’s no doubt the man can write — his work on DC’s Omega Men has been stellar, and his newly-launched take on The Vision for Marvel is off to an intriguing start. I’ve never read Grayson — probably because the idea of the former Robin going undercover as a spy after his secret identity has been blown to the general public just strikes me as being absurd on its face — but folks tell me that’s a pretty good read, as well, so despite being in comics for a relatively short period of time, Mr. King is definitely making his mark. Kudos to him for doing quality work on all the titles he’s involved with.

But — and it’s a big “but” — he’s also a “former” CIA agent, one assigned to work in Iraq no less, and I don’t believe you can “resign” from the CIA any more than you can from, say, the mafia. Once you’re in, you’re in, and the only way out is usually in a bodybag.

Still, you rightly ask, what possible interest could the CIA have in the funnybooks? Well, we know they’ve infiltrated the mass media before — does a little operation named “Mockingbird” ring a bell? — and that comics have been the most fertile “AAA league” for movies and TV for the last couple of decades. By getting one of “their guys” ensconced at the ground level like this, “The Company” could be in on the first- floor entryway of the next multimillion-dollar “hot” entertainment property. Or, hey, maybe there are some pesky leftists among the ranks of comic book freelancers than they just want somebody to keep an eye on. I dunno — but I don’t like the smell of it.

Another thing I don’t like is the apparent “pro-torture” message I picked up on in the first couple issues of Omega Men. This seems to have faded into the background a bit in recent months, and it’s gotta be said that the series as a whole is almost embarrassingly good for a “Big Two” super-hero comic, but still — it’s pretty apparent to anyone reading that the editorial viewpoint expressed by the book is one that “enhanced interrogation” is, at worst, something of a “necessary evil.” When you combine this with the none-too-subtle stance taken in favor of vigilante murder in The Vision, it’s more than enough to suggest, at least to me, that Tom King is someone to follow not only for his talent, but also for the right-wing political messages underpinning his work. 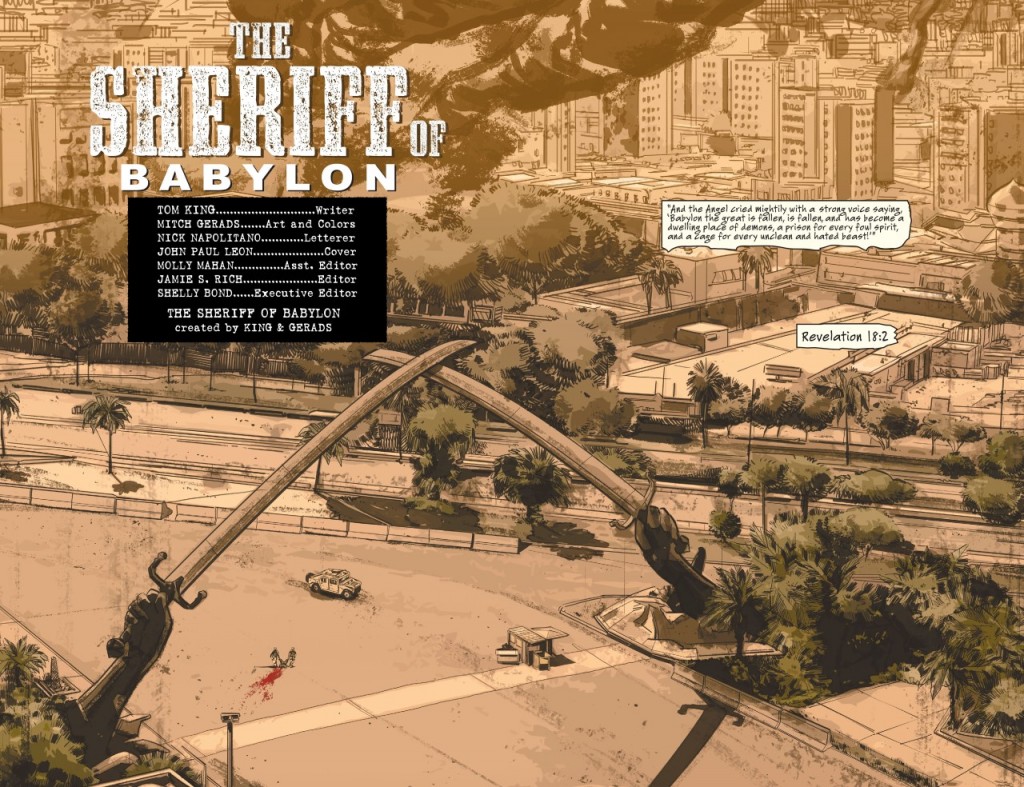 One thing’s for sure — King’s supposedly “former” career informs every panel of every page of his latest work, the eight-part Vertigo miniseries The Sheriff Of Babylon, and even if this turns out to be a pure propaganda exercise, it’s at least going to be an authentic one with a sharp and realistic voice and a “no-bullshit” sensibility.  That’s more than enough for me to label the hot-off-the-presses first issue as my comic “pick of the week,” even taking my concerns about its author into consideration.

At its core, this appears to be a murder mystery set in a highly unique location — the American-controlled “Green Zone” inside Baghdad. Commentary on the necessity, or even the sanity, of our invasion of Iraq is noticeably absent, and instead things are presented in a very matter-of-fact, “like it or not, this is the reality on the ground’ sort of way. For that reason, among many others, I can already see Kathryn Bigelow salivating at the prospect of directing the movie version, and certainly the art by the always-improving Mitch Gerads  — who’s handling the book’s impeccably-chosen colors, as well, and whose style has taken another dramatic leap forward here as it did between his Image series The Activity and his run on Marvel’s The Punisher — really gets the dust inside your pores and the smell of burning oil up your nostrils. Fuck, I even felt hot reading this comic, and it was about 30 degrees here in Minneapolis when I opened it up. So, yeah — this is definitely the real deal, folks. On every conceivable level. 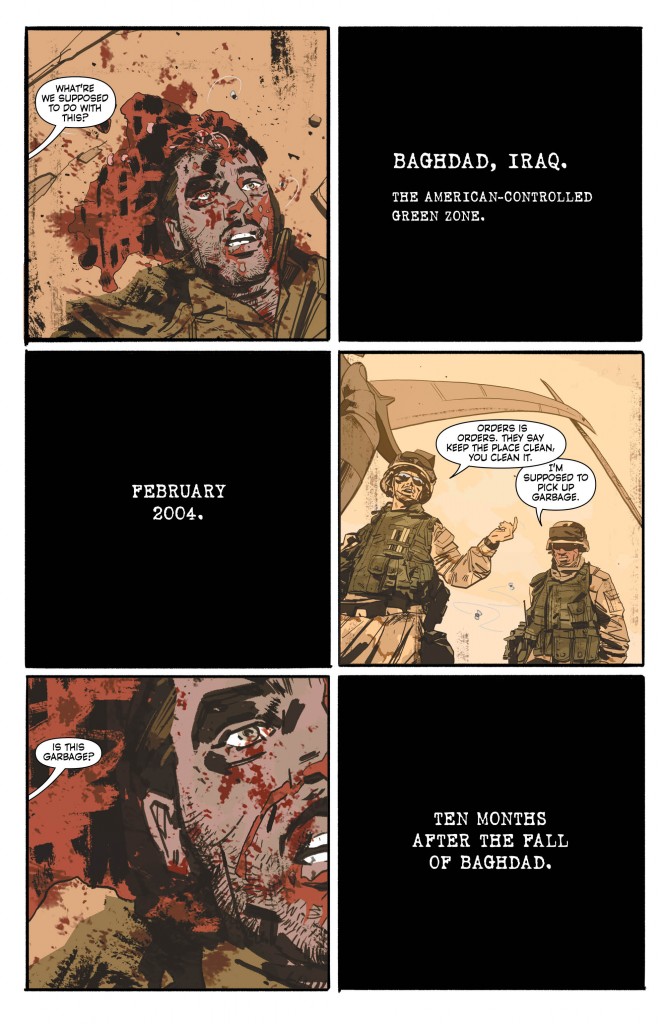 As far as murder mysteries go, it’s definitely altogether unconventional one any way you slice it — and I don’t say that merely because of its setting, but also because of its structure. Apparent right from this debut installment — in fact, serving as said installment’s cliffhanger — is the fact that the murder in question is one that folds back in on the investigation surrounding it, given that one of our three principal players involved (those being an American police trainer named Christopher Henry, and Iraqi cop with an understandable axe to grind with his country’s conquerors named Nassir, and a Western-educated Baghdad native returned home to consolidate control of her hometown’s rapidly-expanding criminal underworld named Sofia) gave the “green light” for it to be committed in the first place and now is in a position to pull the strings in terms of how, or even if, the killer is brought to justice.

Assuming, of course, that anything like “justice” exists in occupied Iraq — a question that’s reflected in the series’ title, taken from a line of dialogue in the book when Henry wonders aloud if there even is such a thing as a “sheriff” in these parts.

Speaking of Henry, he and Nassir are both introduced to readers in separate scenes of well-nigh-unbearable tension that are, again, incredibly cinematic is terms of both execution and feel, and since saying very much about either would “spoil” a lot of what happens in this issue, it’s probably just safer if I say that both of their debuts are quite memorable and leave it at that. 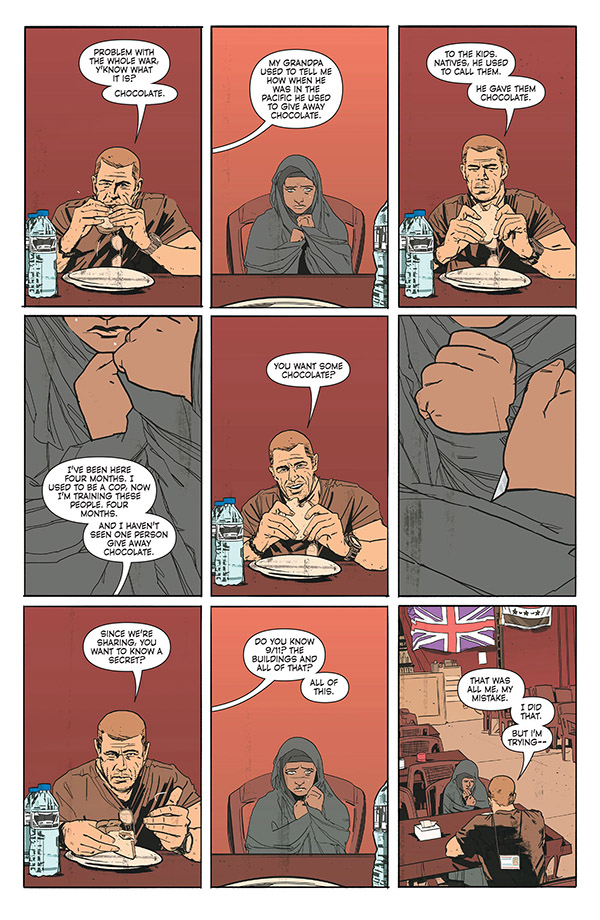 And “memorable” seems to be the operative (no pun aimed in the direction of the writer’s “one-time” employment status intended) word in terms of the reading experience King and Gerads are aiming to create here. Vertigo’s in the midst of releasing a raft of new #1s these days,and this and Slash & Burn are, to this point, definitely the standouts of an impressive-across-the-board bunch. I remain curious to see whether or not King avails himself of the opportunity to comment on the wholesale corruption, not to mention slaughter, that the US invasion and subsequent occupation of the former Babylon brought with it, but even if he politely declines — or, worse yet, whitewashes it out altogether — all the elements are in place here for a “whodunnit?” quite unlike any other we’ve ever seen.