The strains of Yma Sumac’s “Gopher Mambo” over the opening sequence in which an art critic (an unbilled Huey Lewis!) is run over by a car should clue you in right off the bad – the Toronto-lensed DEAD HUSBANDS is lighter, smirkier fare than your standard Made-for-USA thriller. Oh, sure, there’s plenty of plot twists and mayhem, and the News crooner isn’t the only corpse on display, but it’s all done with a wink and a nod in the guise of a dark comedy, full of duplicitous characters whose murderous motives are treated as something to be snarked at. It’s one of the network’s few flicks that would fall comfortably in the “comedy” section, and while it never reaches the heights of classics like ARSENIC AND OLD LACE, it’s still an enjoyable way to spend an hour and a half. Or two hours, with commercials, the way it was meant to be seen – especially as made obvious by the frequent fades to black at every opportune dramatic moment. 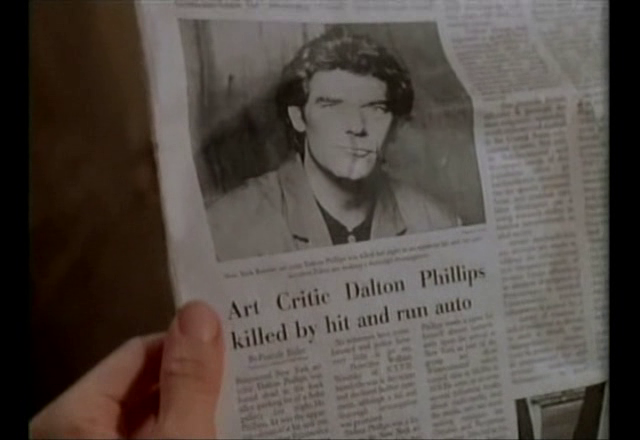 John Ritter and Nicollette Sheridan reteam several years after playing a romantic pairing in Peter Bogdonovich’s underrated NOISES OFF!, though their teaming this time is significantly less tranquil. As far as the hubby, Dr. Carter Elston, a famous relationship advice columnist with his own line of videos and books, is concerned, things are going well, though it’s obvious that the spark isn’t what it once was. His wife, Alexandra, has a different idea – she’s completely over it and ready to leave, especially when Carter talks about leaving fame behind and becoming a doctor in the small town of Cedar Valley, New Hampshire.

Her wishes to stay away from a tiny mecca of, as she puts it, “tractor pulls and inbreeding” find a solution when she meets Sheila (Sonja Smits) and Rosemary (Donna Pescow), a pair of wives similarly disinclined to stay with their beaus but not willing to part with the financial benefits they offer. It seems that the two are part of a chain letter in which you can get your husband’s name on the bottom of the list if you kill the man listed at the top. Where it started or how long it’s been going nobody seems to know, but the death of a certain “Hip to be Square” singer at the beginning of the film has made it so Sheila’s hubby has now been placed at the bottom of the list thanks to his name and address being included on a floral bouquet at the funeral for the victim. 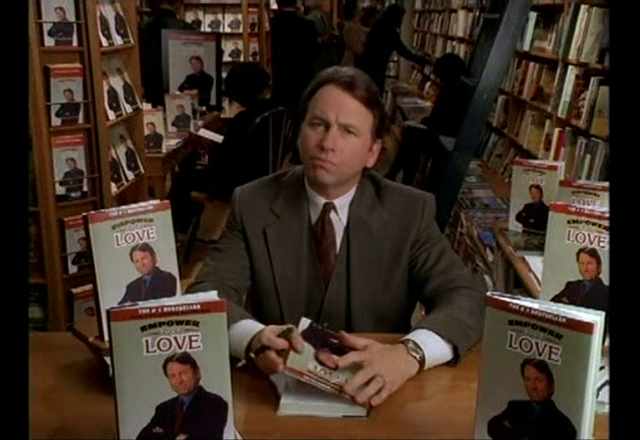 Alexandra doesn’t need to hear any more – once she’s aware of the plan, she’s all in. But things get complicated when she finds her recruitment into the list usurped by another woman, she quickly tries to jump the line. Meanwhile, Carter discovers Sheila’s ripped-up list (grabbed by Alexandra from the trash) and thinks his wife is having an affair, leading him to tail those on it – only to turn up just in time for them to turn up dead.

Based on a novel by Bob Randall (who also wrote the book that provided the basis for the Michael Biehn/Lauren Bacall slasher film THE FAN) and directed by TV veteran Paul Shapiro (whose credits include the similarly toned murderous comedy HEADS and the gay-themed afterschool special THE TRUTH ABOUT ALEX), DEAD HUSBANDS is about as light and fluffy as a movie about wives murdering their husbands is apt to get – the gallows humor is on full display, especially in the sequences where the substitute black widows’ prey is being hunted. But that humor isn’t limited to murder – a few “jokes” are played off so flippantly that it starts falling into bad taste, like Sheila’s reasoning behind her wanting to rid herself of her spouse. Talking absent-mindedly at lunch about how her hubby gets violent, she coyly mentions that “he never leaves a mark,” followed up by Rosemary, whose husband just ignores her, yelping jealously that “at least Warren beats you!”

So, yeah. DEAD HUSBANDS gets kind of dark. 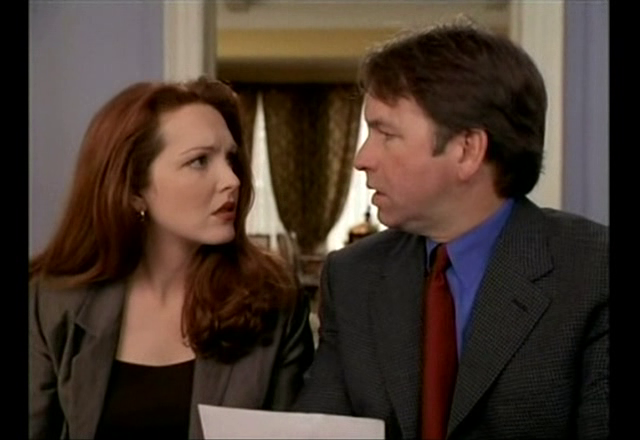 The occasional misstep aside, it’s still a fun film, and everyone involved seems to be having a great time playing such misanthropic human beings. Ritter, for his part, gets to play the straight man, the nice, likeable guy who gets pulled into a mess of ridiculousness because of the people around her. He’s perfectly straight-faced, even when delivering Carter’s couple-healing phrase of “You can share your thoughts with me without fear because I am your safe place, and I promise to listen with both the passion of a lover and the compassion of a friend” before having a deep discussion with Alexandra about how everything between them is terrible. It’s not surprising that he has more screen time with his agent, played by Ritter’s future wife Amy Yasbeck, than anyone else in the film, with Alexandra hanging out with her entertainingly bitchy femme fatale friends, as though Sheridan was prepping for her role in “Desperate Housewives.”

DEAD HUSBANDS has a fair share of clever touches, like the way the flashbacks of Alexandra and Carter’s first meeting are wildly different depending on which character is relating them, and even if it never quite rises to feel like anything more than an above-par bit of made-for-TV fluff, it’s certainly worth a look. It’s a surprisingly mean-spirited bit of black comedy that sometimes feels like two different tones warring with each other (the affable everyman of Ritter’s Carter and the almost Paul Bartellian wickedness of, well, everyone else) but still manages to be consistently entertaining.