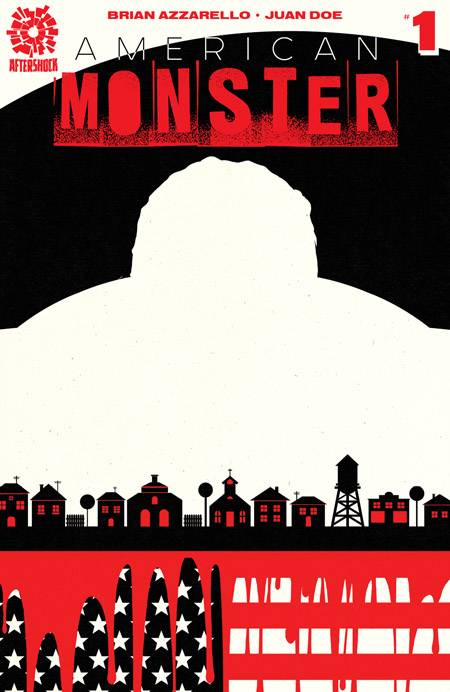 Question: What do you get when you combine a violent home invasion, an ex-mercenary (I think) with a burned-off face, a bunch of good ole’ boys who hang out in a convenience store and like to make fun of the retard who mops the floors there, a grotesquely overweight lecherous creep who lurks in playgrounds paying teenage girls to flash their tits, and a sadistic neo-Nazi meth-gang leader whose idea of fun is to strap a husband and wife to chairs facing each other, give them both guns, tell them that one has to shoot the other in the face in order to survive, and then kills the “winner” anyway?

If your answer is “probably the most depraved and amoral comic book of the year,” congratulations! You’re exactly right. But, as much misanthropic fun as that is in and of itself, my best guess is that writer Brian Azzarello and artist Juan Doe (yeah, I don’t think that’s what his birth certificate says, either)’s new Aftershock Comics series American Monster is also going to prove to be something more than that — at least I hope so. 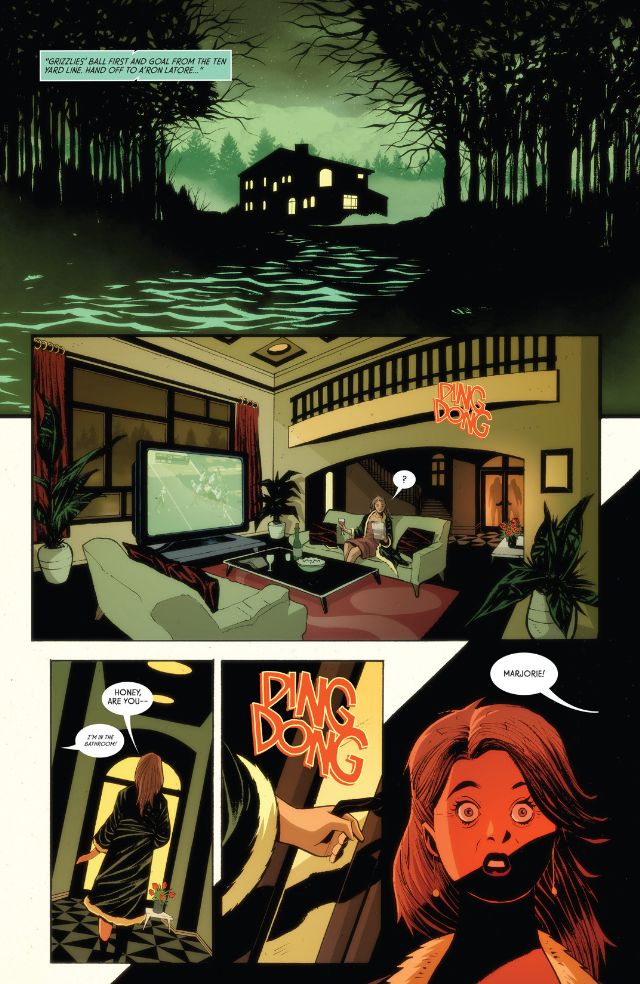 When it comes to slow-burn, ultra-violent, hard-boiled crime comics, Azzarello certainly has the pedigree to inspire confidence despite the admittedly disjointed, “where-the-fuck-is-this-going-anyway?” nature of this first issue. Or had it, at any rate. Frankly, I’d be a lot more inclined to give him all the leeway he needs if he’d just been coming off 100 Bullets or Jonny Double, but those were — what? Fifteen years ago? His most recent “street-level” projects have been far less successful, as anyone who endured his agonizing run on John Constantine: Hellblazer or his wretched Joker graphic novel can tell you. And while his character-redefining run on Wonder Woman has met with a fair amount of praise (how could it not? He included Wesley Willis among the pantheon of gods!), his penchant for involving himself with deplorable cash-in projects like Before Watchmen and Dark Knight III: The Master Race knocks his formerly-sterling reputation down a few notches in my estimation, as well. Sure, one could argue that his Comedian and Rorschach books never had a chance in the first place and that he was maybe trying to make the most of a bad situation, but really — he’s a grown man and should have had better sense than to get involved in such a fiasco. So I guess the question here is — which Azzarello are we going to get? The one everybody loved back in the early 2000s, or the money-grubbing “pen for hire” we’ve seen of more recent vintage? 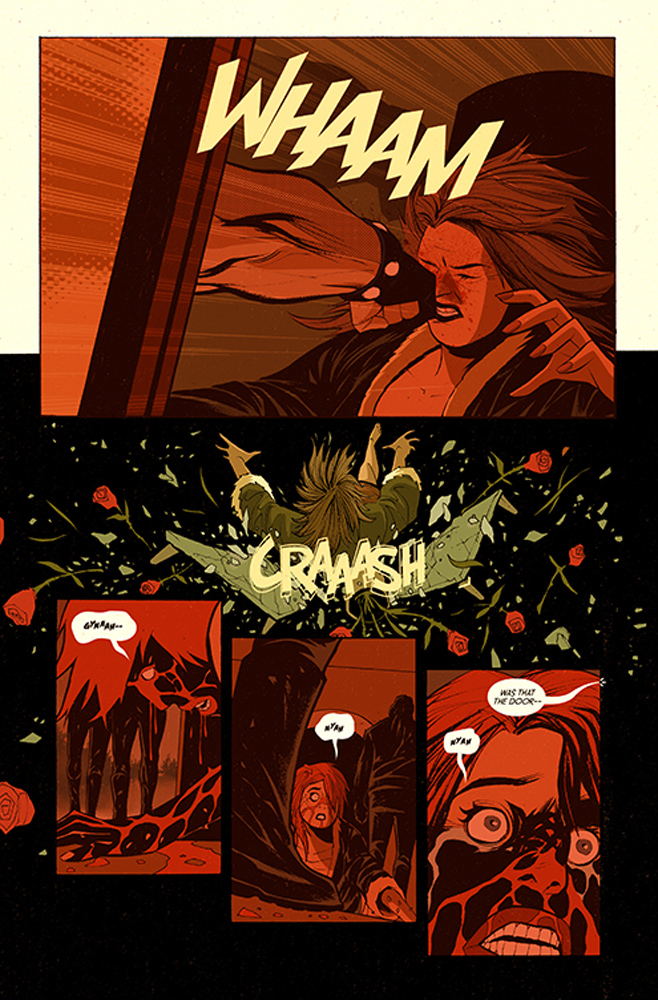 So far, the jury’s still out on that one. American Monster #1 definitely features plenty of the strong-characterization-achieved-with-minimal-dialogue that was a mainstay of his earlier, stronger work, as well as a lot of almost celebratory sadism that used to be his stock-in-trade, so there’s reason to keep your fingers crossed here. There’s also an obvious moral dimension at play from the outset, in that the “American Monster” of the title clearly refers to the nameless (so far), faceless (as in literally) stranger who just drifted into whatever anonymous Midwestern shithole this story takes place in, but everyone else we meet in this opening installment is, in fact, even uglier than he is — their deformities just happen to be on the inside.

I know, I know — the idea that there’s a deep, incurable sickness underneath the Norman Rockwell-esque image of small town Americana has been done to death, but it can still be an effective enough trope if handled correctly. Shit, at the end of the day it’s still what BLUE VELVET and Twin Peaks were all about, and while Azzarello on his best day probably isn’t worthy of shining David Lynch’s shoes, there’s an undeniable vibe running from first page to last here that, close to the vest as he’s keeping his cards, he’ll know precisely when to lay them on the table for maximum impact. The number of visceral body-blown he lands in this issue alone shows that he’s got a very firm handle on both his story and its implications. So again, whether deserved or not, I’m airing on the side of guarded optimism here and happy to give our scribe at least five or six more issues to either earn or lose my trust. 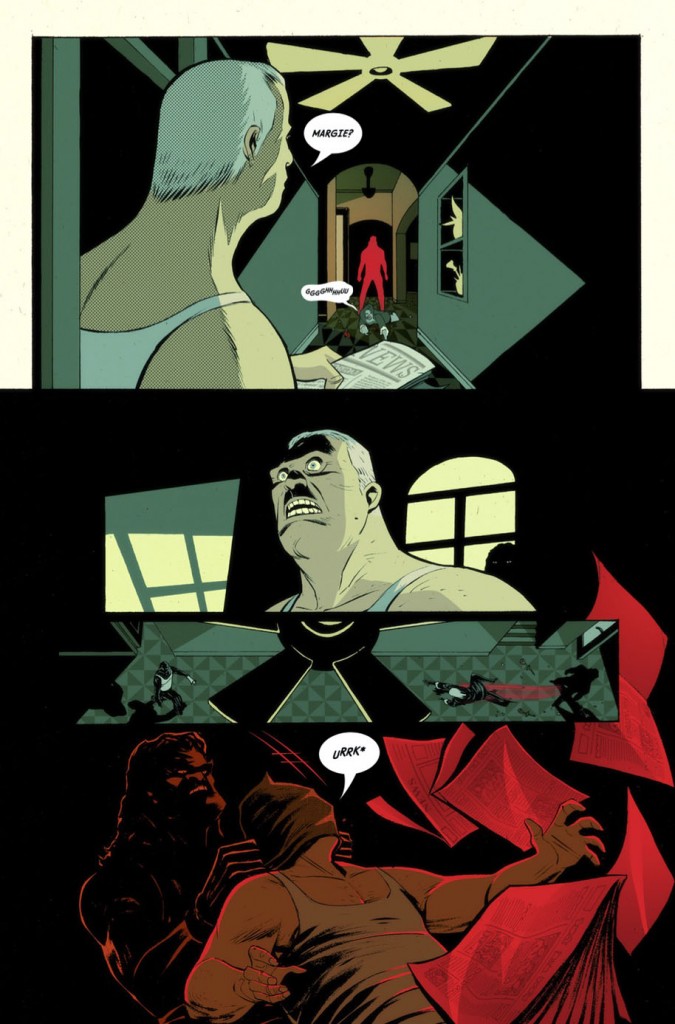 Ditto for the artist — Doe is not someone whose previous work I’m familiar with, but he has a clean, linear style that really works when it works (the scenes featuring regular characters going about their far less-than-regular daily business) and really misses when it misses (our titular “monster” looks far too cartoon-ish and the violence lacks some of the immediacy that a “dirtier, grimier” style would impart it with). More pages looked good than not, though, so I’m prepared to let his visual storytelling style either grow on me, or alienate me altogether — whichever comes first, I guess. 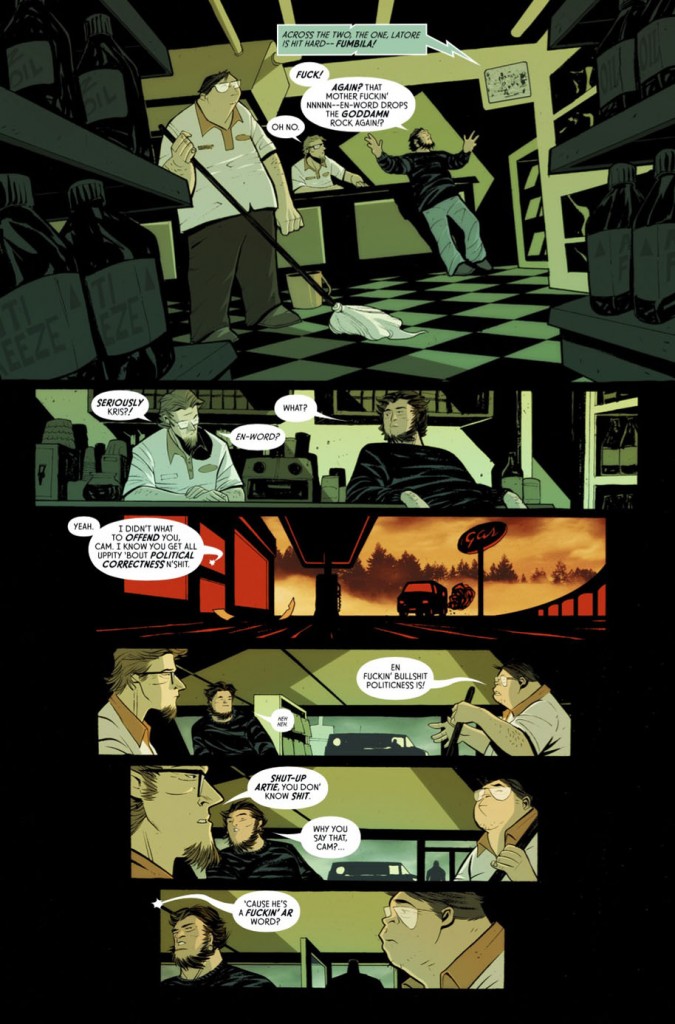 And speaking of alienation, if you need your story to have a hero, this series will probably put you off right out of the gate. There don’t seem to be any actual “good guys” on offer, the question here is only which of these hopelessly-compromised, sullied characters are going to prove to be less bad. We always like fuck-ups and reclamation projects and multiple-times-over losers who come through unexpectedly and do the right thing at the right time, and odds are that American Monster is going to give somebody, somewhere in this cesspool of depravity a chance to be that sort of temporary hero-by-way-of-circumstance-rather-than-design. Whether or not they — whoever “they” may be — comes through? Well, guess we’re going to have to take a “wait and see” approach with regards to that, as well. 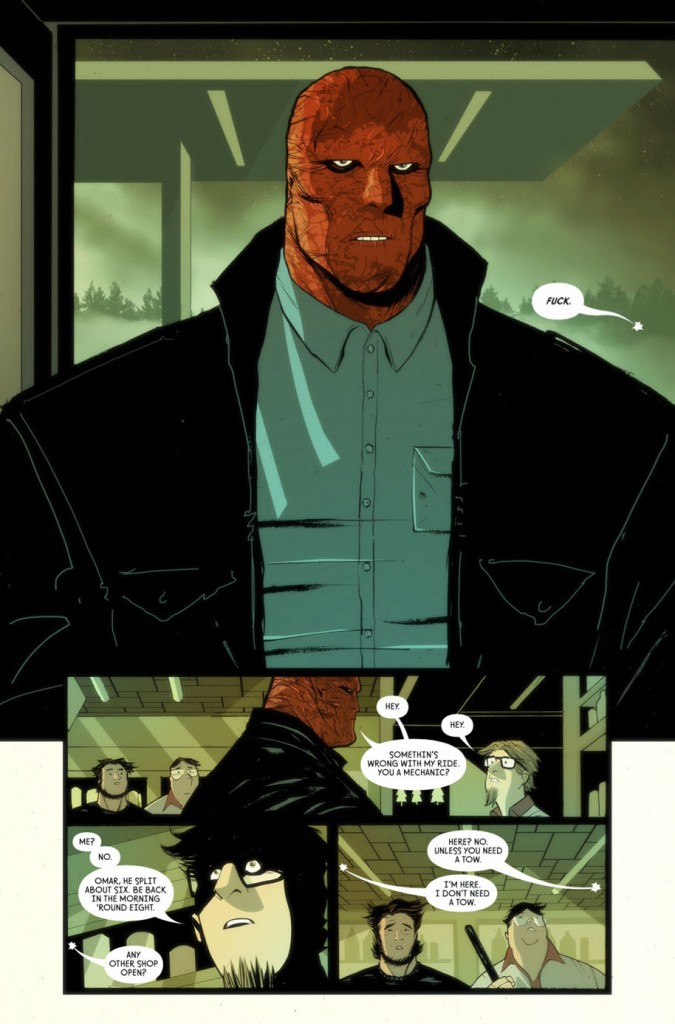 So, what the hell — count me in, at least for now. Azzarello and Doe have shown me enough to convince me that this is worth $3.99 a pop for a little while longer, and I harbor faint hopes that we might even be heading for something kinda, dare I say it, special here. And while a title like American Monster might be best suited for a Donald Trump biography, this comic seems determined, among other things, to give us a cold, hard look at the fetid swamp of psychological, emotional, and material insecurity bubbling under the polite surface of American life that makes it possible for a shithead billionaire demagogue in a toupee to rise to power in the first place. We’re meeting the enemy in the pages of this comic — and he is us.

CHECK OUT @TRASHFILMGURU’S REVIEW OF GUTTER MAGIC #1 OVER HERE!