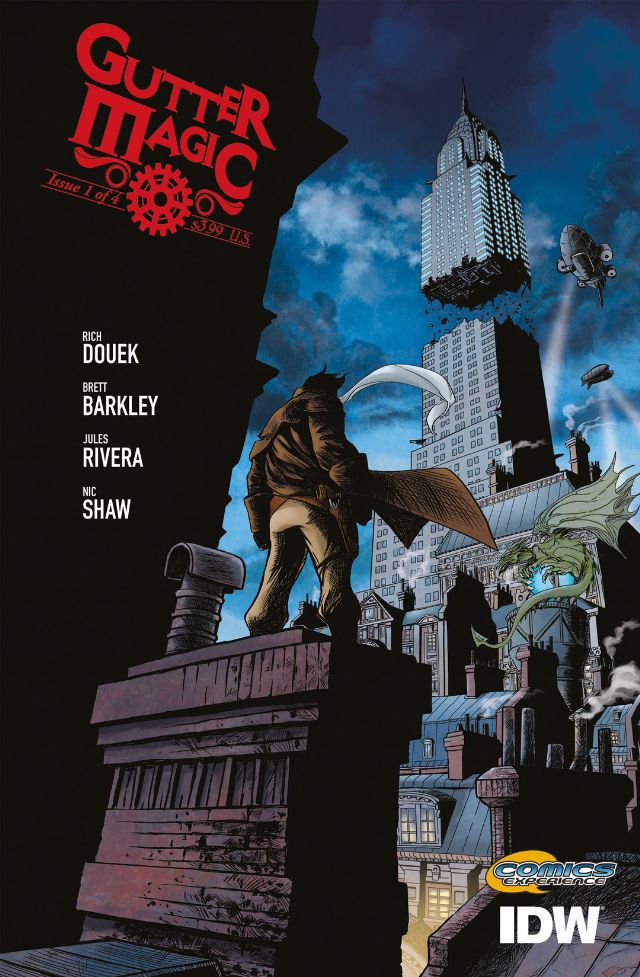 Any long-time comic book reader knows the feeling — “I’m probably not gonna like this, but I’m buying it anyway.” And by all accounts, I really probably shouldn’t like Gutter Magic, the brainchild of creator/writer Rich Douek, who hails from an advertising background, along with artist Brett Barkley and colorist Jules Rivera. For one thing, it’s an “urban fantasy,” a YA-ish subgenre of sword-and-sorcery that I like even less than sword-and-sorcery. For another, the title character has the fingernails-on-a-blackboard name of, I shit you not, Cinder Byrnes. And finally, Byrnes is — yawn! stretch! — a “lovable rogue,” and if there’s one thing I’m bored to the fucking eyeteeth with, in both fiction and reality, it’s “lovable rogues.”

Still, this whole Comics Experience/IDW co-publishing venture is something I really do want to support with my dollars. Comics Experience is doing great work helping aspiring creators “workshop” their ideas into shape and then offering publishing deals for the best of these efforts. It’s one of the most proactive programs for getting first-time writers and artists into print that I’ve ever seen, and IDW, a publisher that I’ve had some problems with due to their continued involvement with ethically-dubious public domain raiders such as Craig Yoe, is to be commended for hooking up with CE on this effort and for getting these no-name-recognition books onto our shelves. Most of these titles will invariably prove to be a tough sell in an already-tough market, and the fact that they’re willing to take a gamble on untested creators telling stories that said creators are even allowed to keep copyright ownership of? Well, that deserves both a round of applause and my four dollars.

So far their track record’s been pretty good, too: Drones was an interesting little yarn with some sociopolitical relevance, and Tet was flat-out fantastic — one of the very best war comics in years and a shoe-in for my top ten comics of 2015 list (where it clocked in at number eight). And so, despite my reservations about it, I knew from the outset that I was going to give the third Comics Experience/IDW title a shot — and all I can say now is “holy shit, am I ever glad I did.” 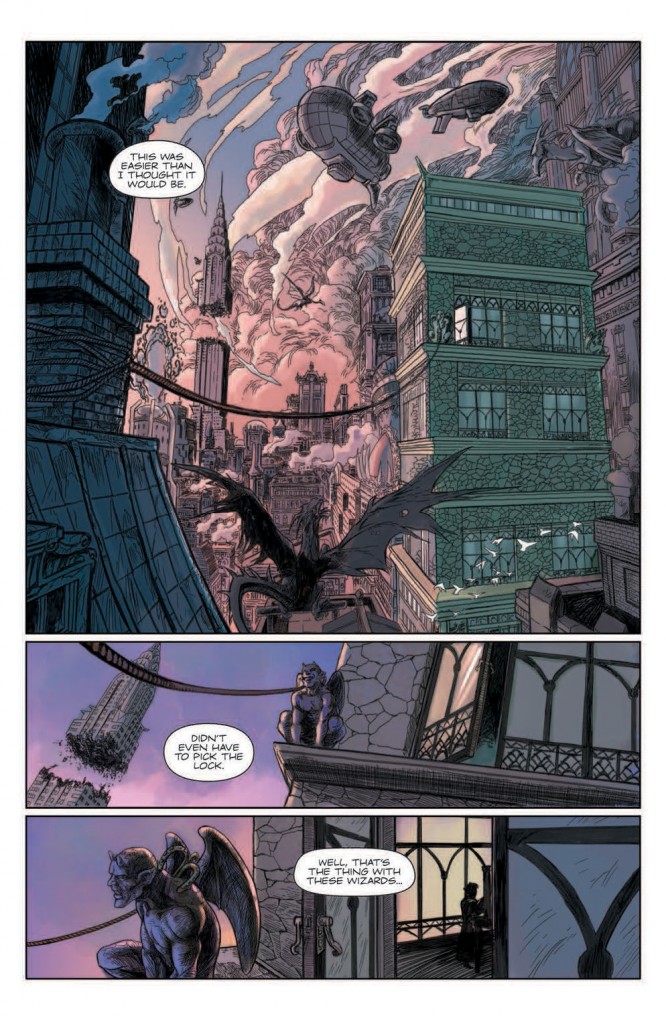 Gutter Magic #1 is something of a curious beast in that I both can and can’t put my finger on exactly why I like it so darn much. I can, of course, point to Barkley’s outstanding, evocative, highly-detailed art, which brings this off-kilter world to lushly-realized life, and to Rivera’s beautifully-chosen color palette, but for the life of me I still can’t understand why Douek’s script hit home for me — I only know that it did.

The premise is certainly intriguing, in that we’re apparently being thrust into a world where magic, not weapons, won World War II, and where the wizards who emerged victorious have rebuilt New York City (and, one presumes, the world) in their image, with an elite “magical class” ensconced in majestic towers while the rabble are forced to eke out some kind of subsistence living on the streets far below, hoping to pick up scraps of discarded (and titular) “gutter magic” tossed aside like table scraps from their “masters” on high. Given these conditions, you’ve honestly gotta wonder how much worse things would be if Hitler had won — until you remember about, ya know, the concentration camps, ethnic cleansing and all that. So, yeah, I guess the “good guys” still emerged victorious — even if they’re not all that good themselves. 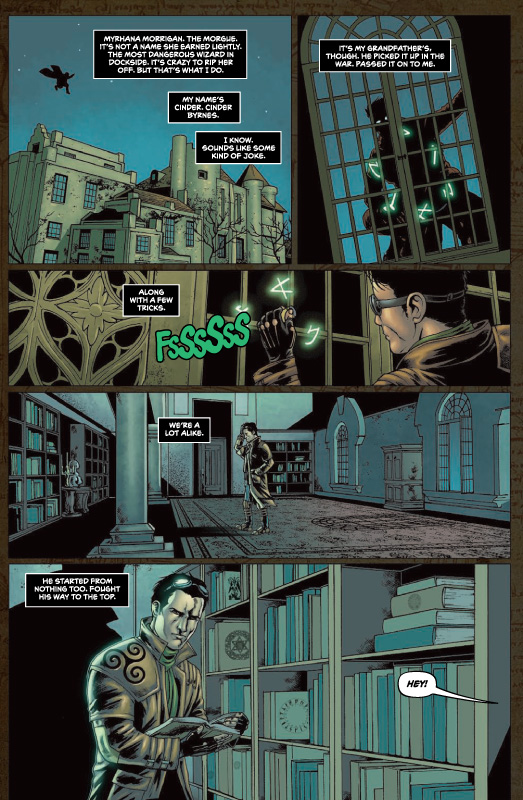 Enter our “lovable rogue,” who actually is likable, Cinder Byrnes, who has the family pedigree to be living among the elite, but whose “connection to magic” has somehow been mysteriously broken. As our story opens, he’s in the midst of stealing a spell that will put all this to rights and allow him to assume his “proper” place in the draconian social order, but first he’s got to both a) get the spell to actually work, and b) survive long enough to see that happen, which won’t be easy, given that the spell’s “owners” have sicced a ruthless mercenary band on his tail.

By and large, “world building” is the order of the day in this debut installment, and Douek and Barkley (who didn’t illustrate Douek’s earlier, formative, digitally-published issues of this series, but was brought into the fold thanks to his CE involvement and is so far proving to be a positively revelatory discovery) sink their teeth into that effort with gusto, giving us streets, markets, buildings, and characters that all feel reasonably authentic, given their admittedly extraordinary circumstances. There’s a two-page spread of a chase through the “Goblin Market,” for instance, that simply must be seen to be believed, but truth be told, every panel of every page here is rich in both detail and dialogue that is both evocative and memorable. 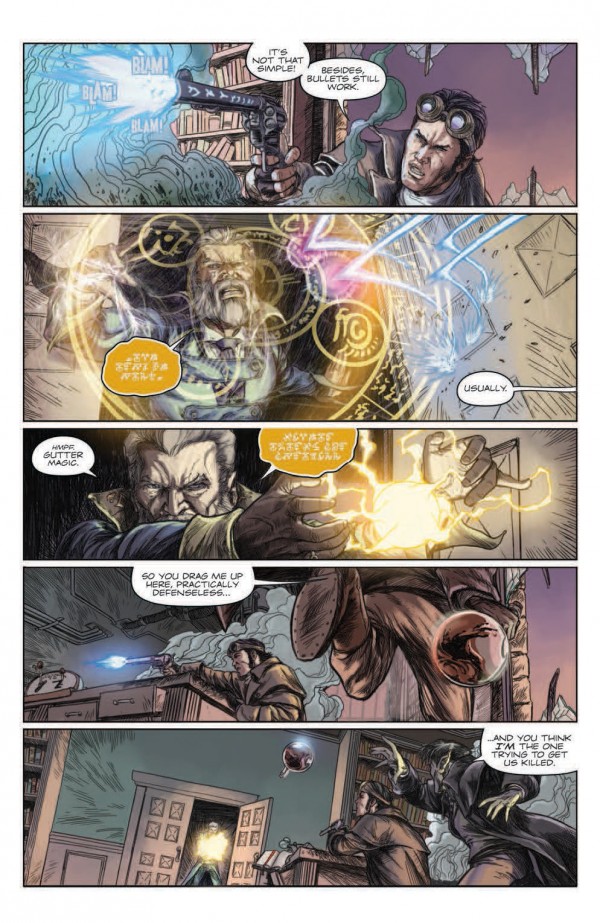 Throw in some tantalizing hints that the grandest magician of all may have been H-bomb inventor Robert Oppenheimer, and the idea that there’s much more going on here than meets the eye really kicks into another gear. There’s a lot of  gleefully-surplus-to-requirements intrigue and mystery being layered on top of what at first appears to be standard-issue “Dungeons And Dragons With A Steampunk Twist” storytelling, and while some may say that the devil is usually to be found in all those extra details, in Gutter Magic they’re absolutely transformative, as Douek, Barkley, and Rivera seem to have found a spell that allows them to turn the seemingly mundane into the instantly impressive. Bring on the next three issues, then, since this is — I’m sorry — magical stuff indeed.