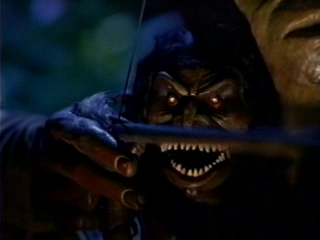 Few directors get the opportunity to create sequels to their most famous work after two decades. Peter Bogdanovich revisited THE LAST PICTURE SHOW in TEXASVILLE, George Romero returned to his slow-moving zombies in LAND OF THE DEAD, and Ted V. Mikels finally finished the story that THE CORPSE GRINDERS had to relay 29 years later in CORPSE GRINDERS II, making this the first opportunity to reference Bogdanovich and Mikels together in a single sentence. 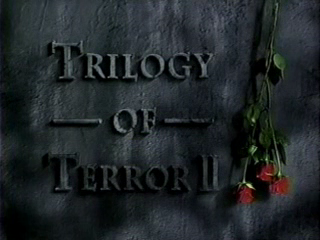 And there’s the strange case of Dan Curtis, the Dark Shadows mastermind who took 21 years to follow one of the most memorable made-for-TV movies of all time, 1975’s TRILOGY OF TERROR.

TRILOGY OF TERROR is no easy act to follow, as the boob tube classic features Karen Black in three different stories, the most memorable being the final segment in which she plays a single gal fending off the violent advances of a Zuni Fetish Doll. (Haven’t seen it? Do so. I’ll wait.)

TRILOGY OF TERROR II, first airing on October 30, 1996, follows the same format as the original, with Lysette Anthony filling in for Black as the star of three different tales as three very different women. Why Lysette Anthony? Well, the attractive-but-not-particularly-memorable actress had played a role in Curtis’s ill-fated 1991 “Dark Shadows” remake, and he seemed intent on making her into a star in the best way he knew how. He could have hoped that TRILOGY II would do for Anthony what TRILOGY did for Black, launching her out of the PYXes and into the DAY OF THE LOCUSTS of her career. (It did not, though she did get to play the female lead in the Pierce Brosnan ROBINSON CRUSOE. Also, there was a Pierce Brosnan ROBINSON CRUSOE.) 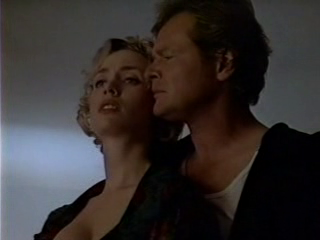 Like the original TRILOGY, the three stories involved are unrelated except for the actress in the lead, with each segment given unique opening credits. The first third, “The Graveyard Rats,” finds Anthony as the adulterous wife of a wealthy, mean-spirited invalid played by Matt Clark with such venom that he seems about ten seconds away from claiming that it’s Father’s Day and he wants his cake. Her beau, played by Geraint Wyn Davies (himself no stranger to fangbearing television as the star of Forever Knight), plots to kill him, but even after they do, they still have to do a little grave-robbing — and those graves turn out to be inhabited by giant, killer rats.

“The Graveyard Rats” is a fun little work of trickery, like an adaptation of a particularly solid “Crime SuspenStories” tale. It helps that all of the characters are played to just the edge of camp — it’s a segment in which Geoffrey Lewis, playing — shock –a sleazebag, turns in one of the more subtle performances. The rats also look pretty good, especially when you consider that they’re obviously live effects in a situation that would have been automatic CGI a decade later. 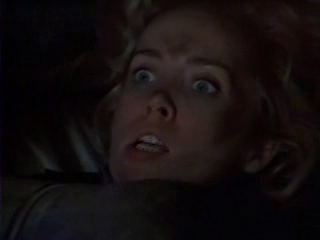 Unfortunately, “The Graveyard Rats” is the high point of the film. “Bobby,” the middle segment, features Anthony as a mother who magically summons her deceased son who was “accidentally” drowned. The boy comes back, of course, and everything would be sunshine and roses except that a kid coming back from the dead is never sunshine and roses. Anthony’s character doesn’t seem to make much sense (she seems to forget that she performed the spell to bring him back as soon as he appears again) and while the kid (Blake Heron) is good and creepy, it doesn’t really add up to much we haven’t seen before, and the “twist” ending seems more like an inevitable “twist” ending than anything the story has built to.

“He Who Kills” is the final segment, and it’s most interesting for how it fails. Awkwardly given the credit “Based on the Zuni doll from the short story ‘Prey’ by Richard Matheson” and taking place shortly after the events of “Amelia,” the final segment of the first TRILOGY OF TERROR, the short begins with the investigation into the deaths of Karen Black’s character along with her mother. (It seems that the final shot of trilogy paid off exactly as it seemed it would.) The cops find the charred remains of the doll and take it to scientist Anthony for investigation (which is urgent for reasons that make little sense), at which point it comes to life again and starts stalking her all over her lab. 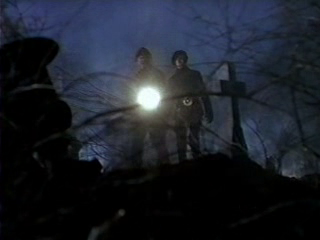 After the setup, “He Who Kills” mostly feels like a shot-for-shot remake of “Amelia,” even setting up the same peril-inducing responses. Anthony traps the doll in a small contraption, and the doll begins slicing his way out, with Anthony desperately grabbing on to the knife in a weird attempt to get it away from him in a sequence exactly like the one in the original. (It’s even more mind-boggling that Anthony’s scientist doesn’t use gloves when she does this when we see that she has gloves a few scenes later!) The doll makes frantic noises and stalks her around – eventually one of them wins.

Curtis’s direction on “He Who Kills” is just fine, and it’s obvious that he knows that TRILOGY OF TERROR‘s real money-maker was the Zuni doll, so it’s perfectly understandable that he’s want to try to recreate that magic. But “He Who Kills” feels like just that – a completely insincere attempt at recreating magic while adding no fresh ideas or moments. It feels almost like Curtis trying to do a Gus Van Sant PSYCHO exercise, delivering such a sure-fire crowd pleaser in a familiar package.

But we’ve seen it all before, and better. It’s a genuine shame that TRILOGY OF TERROR II ends with a rerun, as it starts out so strongly and could have easily been salvaged by the mediocre “Bobby” had Curtis delivered something, anything more than the story that he already told us. Antony makes for an amiable lead, and it’s nice to see her take on the three diverse roles, ranging from scoundrel to panicked mother to well-meaning scientist, so while TRILOGY OF TERROR II doesn’t hit an anthology home run, it’s not a bad film, just a negligible one. Still, one damn good story out of three is more than a lot of anthologies manage, and how often do you get a short “based on” a fictional doll? Does ANNABELLE have a credit that odd?