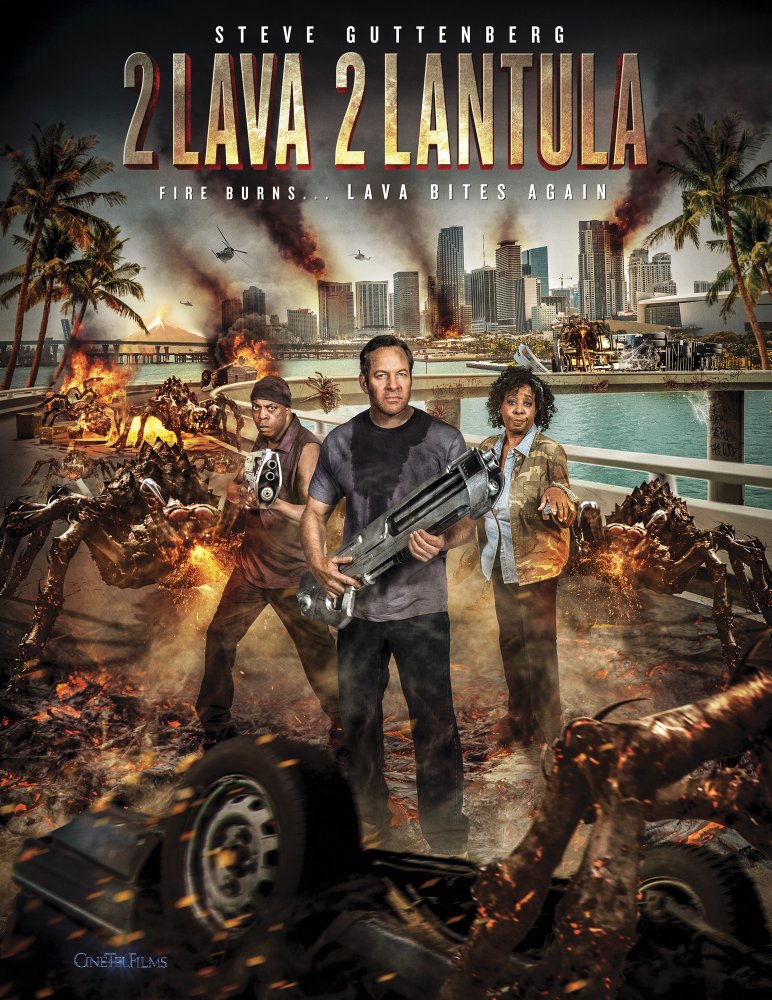 I honestly don’t think I’ve ever watched a “made for SyFy movie”. From the previews and from pop culture references, I always guessed that they were idiotic films with bad acting, and horrible effects. I was wrong. 2 LAVA 2 LANTULA! is hilarious, a lot of fun, and I was surprised at how good the acting was. Now I know what I’ve been missing out on all these years. A laugh riot from beginning to end, 2 LAVA 2 LANTULA! is exactly what I needed.
During the filming of “CLOWN COPS”, the movie within a movie, star of the movie Colton West (Steve Guttenberg) is made aware that the lavalantulas (giant tarantulas that are made of molten hot lava) are attacking Miami, FL where his beautiful college daughter Raya West (Michele Weaver) is partying it up for spring break. I can be a sucker for nostalgia from time to time, and seeing Steve Gutenberg in a movie again really gave me chills. Not only that, but his funny noise making sidekick from POLICE ACADEMY Michael Winslow is also back, with Winslow playing Colton West’s right hand man Marty. Both still have it, very funny, and on point.
The initial attack of the lavalantulas to Miami beach was a great homage to PIRANHA an HUMANOIDS OF THE DEEP, a perfect JAWS ripoff. The shaky camera trick to simulate an earthquake was cheese at its finest. The way that the lavalatulas hunt people by the person’s body heat brings to mind the signatures in PREDATOR.
I feel like I’m missing something. I should have guessed from the title aping 2 FAST 2 FURIOUS, that this is sequel. Great thing about 2 LAVA 2 LANTULA! is it’s easy to put the pieces together and not hard at all to figure out the story.
With the fiery havoc being wreaked over the sunshine state what’s a hollywood super star to do? Well Colton West, who evidently defeated the lavalatulas in the first film, jumps into action. Not only that, but he brings along his somewhat bumbling personal assistant Kyle (James Bellinger) and his costar Marty. Michael Winslow as Marty is everything a middle aged nerd could hope for. He’s still making all those crazy noises with his mouth from the POLICE ACADEMY movies, but he’s also like a “Q” to Steve Gutenberg’s “Bond”. He makes kick-ass weapons to help freeze and destroy the lavalantulas.
Without being a complete parody, The humor in 2 LAVA 2 LANTULA! is top notch. Lots of references to movies, everything from POLTERGEIST, SCARFACE, and even DR. STRANGLOVE gets poked fun of. There is a lot of nostalgia, but it doesn’t bog down the movie. None of the references are in the least bit topical, but if you are a movie fan, you’ll get the jokes and laugh.
Sure the CGI effects are horrible, but 2 LAVA 2 LANTULA! to so light hearted, that it just sort of adds to the comedy. Also, the scenes where Colton and his crew or his daughter Raya and her friends are fighting of the lavalantulas are intense action sequences. During the more action-packed scenes, Colton’s voice changes to something out of THE DARK KNIGHT. I love it.
Throughout 2 LAVA 2 LANTULA! there are unlikely groups of people banding together to do battle against the lavalantulas. This of brings to mind 28 DAYS LATER. There is even a hillbilly DELIVERANCE character used as extra comic relief called “Alligator Dundee” (Eric Etebari), who teams up with Colton to help him navigate the Florida everglades. He had me in stitches the entire time. They even brought back Marion Ramsey, Sgt. Hooks from the POLICE ACADEMY movies. She’s just as sassy as ever.
being a made for television movie there isn’t much gore. The little bit that there is, is enjoyable. I especially appreciated the scene where Raya’s friend Daniella’s face explodes with thousands of baby lavalantulas. It was a cool SLITHER moment that will creep out anybody who doesn’t like spiders.
As much as the seasoned actors camped it up, the younger cast members played it straight. This divergence in technique doesn’t usually work in a film, but here it didn’t, and that helped keep 2 LAVA 2 LANTULA! fresh.
After reading about director Nick Simon’s trials and tribulations making THE GIRL IN THE PHOTOGRAPHS,  his bleak homage to 1990s teen slashers, it’s completely understandable why he would make a ridiculous movie like 2 LAVA 2 LANTULA! I could see it as a palate cleanser. 2 LAVA 2 LANTULA! is a fun, action-packed knee-slapper of a movie. Any genre fan who doesn’t have a stick up their ass is going to love this giant monster movie. RECOMMENDED!